Would you want to live on “Sausage Rise”? How about on a street named after someone you violently disagreed with? Is a simple flower name too boring?

Streets with historic names and the names of famous people are found more or less everywhere.

There can be few Swiss towns of any size which don’t somewhere commemorate General Dufour, who led the winning side in the 1847 civil war, or General Guisan, the commander in chief in the Second World War.

In the centres of old towns streets may be named after the jobs once performed there: who knows now (or could imagine) that Geneva’s Place de la Fusterie must once have been the haunt of carpenters, for example? Others refer to long forgotten buildings – public ones like the granary (Kornhaus) or arsenal (Zeughaus), or private ones like inns or even one-time house-owners.

No one generally objects to such names, but when it comes to new streets things can get complicated.

The Baronne de Rothschild, whose family has deep roots in Geneva, was quoted in Le Matin newspaper recently up in arms because the city has allegedly stopped naming streets after famous people and decided they have to be “simple to understand and easy to write”.

“That kind of reasoning is going to end up with us losing the history of Geneva,” she told the paper.

In fact, the recommendation for simplicity is part of national guidelines. While it is true that no Geneva streets have yet been named after people in 2011, many seem to carry on the names of the woods or meadows that once lay in the same place.

In Switzerland it’s up to each commune to decide on the names of its streets, advised by a naming commission. But policy varies widely from place to place, and neither the commissions nor the national guidelines are followed blindly.

The problem with proper names is that they can be a trap: a hero to one is a villain to another, and reputations change.

The architect Le Corbusier and the naturalist Louis Agassiz are both honoured in several towns, but their reputations have recently been tarnished with revelations of anti-semitism and racism respectively.

“There are so many quarrels, with some for, and some against, so there are always political questions involved,” historian Corinne Walker, who has written about the street names of the communes around Geneva, told swissinfo.ch.

“It’s a bit of a pity, because you are depriving yourself of interesting people.”

Geneva ran into this problem in 2010 when it named a street after gynaecologist Gabrielle Perret-Gentil (1910-99). It triggered an impassioned public debate. Some described her as a Nazi collaborator because she spent time at a clinic in a poor part of Dresden in 1943. For others she was a courageous fighter for social and women’s rights. The real bone of contention seemed to be that she was prepared to perform abortions when she thought the mother’s health was in danger.

She got her street – but Walker said the controversy was one of the reasons why Geneva has rethought its policy.

Such considerations do not seem to worry Italian-speaking canton Ticino. There the naming commission favours either local personalities, or traditional geographic names.

“A year ago the commune of Pollegio was determined to give some of its streets the names of trees,” Michele Croce, head of the cantonal survey office, told swissinfo.ch.

“The cantonal naming commission got quite upset. They didn’t think you should choose plants which have no special connection with the place. But the commune decided that that’s what it wanted, and no one could do anything about it.”

Despite national guidelines recommending that dialect should be avoided, the commission in Ticino restricts itself to checking the spelling. The language is up to the commune.

“In smaller villages people feel close ties to their dialect, and the trend there is to choose the dialect form, while in the cities the trend is towards written Italian,” Croce explained.

The city of Bern does not always follow the national guidelines to the letter either. Its current practice shows a strong streak of imagination and humour, as city archivist Emil Erne, who sits on the naming commission, described to swissinfo.ch.

In 2005 a network of previously mainly anonymous paths with practically no addresses acquired names like “Undo-Endo”, “Insula Dulcamara” and “Mehr Vogel” (More Bird)  - certainly not “ordinary words” as recommended by the national guidelines.

They are all in the area of the Paul Klee Zentrum, and are named after works by the artist – who was “as creative with language as he was with pictures”, says a booklet issued to mark the event.

Given the prestige of the site, the naming commission felt it would be much too boring for its address to be simply Klee Strasse 1.

Ironically, the local council member who had first wanted to honour Klee with a street, objected to the plan. “He said it didn’t fit in with the normal practice – which is true,” said Erle. “And also that for citizens with a sense of tradition the names were very outlandish. So he asked the council to reconsider. But it didn’t.”

“The then head of the planning department responded by saying: ‘We should be proud that Bern has had the courage to do something unusual and unconventional.’”

Even in Bern, not all unusual names get through. New homes are now being built in an area known as Chäs und Brot, or cheese and bread. It got its name from the legend that troops were fed there on the eve of the battle of Laupen in 1339. According to one story, the officers were quartered on a little hill, and got sausage as well.

“We wanted to call the street leading up the hill Wursthoger (Sausage Rise), but the developers vetoed it, on the grounds that it would make the houses hard to sell,” Erle said. “There are some limits to fantasy and creativity!”

When new residential areas are built, the streets are united by a single theme.

Thus the streets in a new development on the western edge of Bern are named after personalities from western Switzerland.

Other possibilities considered for the area were names reflecting its geological past, or locations lying to its west, from the next village to the furthest star.

The city likes to commemorate well-known local personalities, but the street must have some connection with the person.

A very brief explanation of who the person was is usually added on the street sign.

As far as possible, streets are not renamed, because this is expensive for residents and businesses.

However, there are many stretches of street in Bern (and other cities) without addresses.

The dialect chansonnier Mani Matter was recently honoured by a small street in the centre of town which runs between the town hall and a church; because no-one lived on it it could be detached from the street it technically belonged to and renamed.

A recent trend in Bern, and elsewhere, is to name streets after women. Traditionally, very few women have been honoured in this way.

Street signs in the centre of Bern are in red, yellow, green, white and black: this dates back to the French invasion of 1798, when the town was divided into five sections each designated by a colour. 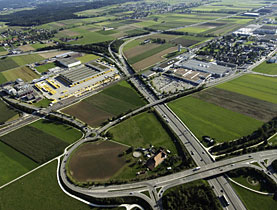 Switzerland has gone from a largely rural country to an urban one in just 70 years with developmental sprawl taking over pristine alpine regions, ... 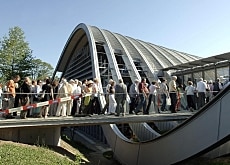 Paul Klee Centre is a crowd-puller

Hundreds of art lovers turned up at the opening of a new centre in honour of Swiss artist Paul Klee on Monday. While all were united in their ...

A special building deserved special tribute. Bern decided to name a network of anonymous paths after Paul Klee works when the innovative Paul ...

A stroll down the street, now obsolete... Google Street View cameras have photographed and mapped out several major cities in Switzerland. The ...