Dadaism is the only artistic movement that started in Switzerland and conquered the world. Zurich’s Cabaret Voltaire was where it began 100 years ago, and this year the city is marking the centenary. But hasn’t Dadaism been dead for a long time now?

What is the bestselling Dada artwork? Probably, the Swiss 50 franc note. It features a work by Swiss artist Sophie Taeuber-Arp. Dada is much more than “Gadji Beri Bimba”, the famous sound poem by its founding father Hugo Ball. Dada was not just nonsense, but chance, events, collages, typographies... Whatever it was, it had to be unconventional.

It all started at Spiegelgasse 1, in the Niederdorf quarter of Zurich. Today, Cabaret Voltaire’sexternal link main room seems to have scarcely changed in the past 100 years. Paintings and collages hang on the walls along with the biographies of famous Dadaists. Next to a piano lie the parts of discarded shop dummies.

This is where Hugo Ball and Emmy Hennings founded their hodge-podge cabaret on February 5, 1916, amid the chaos of the First World War.  It was the starting gun for the Dada movement. The term “Dada” first arose a good two months later, however.

“They had been putting on shows for a few months before Hugo Ball took to the stage dressed as a bishop and chanted the first sound poems like a priest, probably on June 23,” says Adrian Notz, the director of Cabaret Voltaire.

Zurich was the birthplace of the Dada movement and its opposition to the cultural values artists believed had led to the First World War.

The Dada artists, most of whom were emigres, moved on after that. Spiegelgasse 1 became the Meierei Winebar again. After the war, most of the Dadaists returned to their home countries.

The house has by and large been empty since the 1990s, Notz says.

Conceptual artist Mark Divo heard about it and together with about a dozen other people, took over the house as a squat on February 2, 2002. “With real style, everyone beautifully dressed,” the 50-year-old tells me in a Zurich café. They had guitars and put on a concert.

“At some point the police arrived. We said we had inherited the house. The officers were happy and helped themselves to some canapes. No one realised it was a squat. They only cottoned on a few days later.” He still enjoys recounting this episode.

Cabaret Voltaire Home of Dada up for sale for CHF13m

The home of Dada, Cabaret Voltaire, is looking for a patron with deep pockets to keep the anarchic art movement alive in Zurich.

Zurich artist Ajana Calugar was a fellow squatter. “The walls were full of pictures, postcards, texts, and glued-together maps of the world. A 360-degrees 3D installation. You were in another world,” the 36-year-old recalls.

She found her way to this subculture through the squat. “It made a lasting impression on my life,” she says. Two years later she and Divo played leading roles in the documentary film “Dada Changed My Life”.

Dada belongs to everyone

What Divo likes about the Dada movement is its collective aspect. “It was an artistic movement made by artists,” he says. For the centenary, he is planning a Dadaist seminar in his hometown of Prague, and wants to examine the influence that Dada had on the subversive movements that originated in Zurich.

At Cabaret Voltaire on February 6, Calugar is presenting “Chaostage”, a pun on the German for ‘chaos days’ (Chaos-Tage) and the English word ‘stage’. “There will be a range of events involving music, performance art and film,” she says. “There are no rules.” For her, Dada is “a playful departure from everything that is conventional”.

Dada is not really definable. “Even Dadaists don’t know what Dada is – apart from the Chief Dada, and he isn’t telling anyone,” the Dadaist Johannes Baader wrote in 1919.

Juri Steiner is co-curator of the exhibition “Universal Dada” in Zurich’s Landesmuseum and heads the association that is organising events for the city’s centennial celebrations. He discovered Dada during his ‘Sturm und Drang’ phase, a proto-Romantic movement in German literature. A former director of the Zentrum Paul Klee in Bern, he is an acknowledged expert in Dadaism.

For him, Dada means “that you have to go through a radical form of embarrassment in order to find yourself. And beyond this fear of failure is a new, creative freedom which, in the case of the Dadaists, unleashed fabulous art works.”

“This eruption can be traced in art to the modern day,” says Steiner. Dadaism completely changed the art that came after it. He calls Cabaret Voltaire “a monument to the avant-garde”.

The heirs of Dadaism are the Surrealists, the Lettrists, the Situationists, Fluxus, punk, the beat generation, and today’s performance art. “For instance Marina Abramovic alludes to it,” Notz says.

“It is a way of creating a moment where the border between a passive public and an active artist evaporates. That must have been one of the exciting moments in the Cabaret Voltaire,” Steiner says. Dadaism as a state of mind is still “virulent” today.

The Dada centennial celebrations are taking place not just in the real world but also in cyberspace. The two biggest projects are Dada Dataexternal link, an interactive homage to Dada in four languages in which swissinfo.ch’s parent Swiss Broadcasting Corporation is participating, and Dada Digitalexternal link, a digitisation project by the Kunsthaus Zurich.

Kunsthaus curator Catherine Hug is responsible for Dada Digital. Her fascination is infectious. In the restoration room, eyes shining, she shows various original Dadaist printed texts that are waiting to be digitised. “The wonderful thing about Dadaism is that it is a call to everyone. It is very inclusive,” Hug says.

The Kunsthaus has one of the biggest collections of Dada artworks in Switzerland. The public knows the highlights “but the countless documents and magazines that are a part of what defines Dada are leading a dormant archive existence”, Hug says. That is why the Kunsthaus is now making approximately 540 artworks available online. She says she was fortunate enough to work closely with the Dada specialist Raimund Meyer on the project.

It is clear that the conventional series of events planned for the centenary has drawn criticism. For instance Regula Stämpfli, a political scientist, wrote in the Basler Zeitung of the concept: “The Dadaists of those days would have laughed themselves to death.”

Steiner counters the criticism: The platform from which different things can be coordinated doesn’t have to be Dadaist itself. It is much more important “to be able to discuss Dadaism historically, to be able to take on this legacy and say ‘this belongs to us.’ Even if the Dadaists were not necessarily Swiss”.

A wide array of events in theatres, museums, music venues, festivals and online are planned throughout 2016 – not just in Zurich.

Cabaret Voltaire is celebrating Dada on 165 days and is showing an exhibition, “Dada Obsession”. With accompanying events it seeks, in its own words “to create an artistic space where the event is in the foreground, where excessively challenging playfulness leads to the brink of madness, to unconsciousness”.
Other focal points of the centenary are the exhibitions “Dadaglobe Reconstructed” in the Kunsthaus and “Dada Universal” at Zurich Landesmuseum.

The Dada centenary is receiving significant support from the city and canton of Zurich and from the Federal Office of Culture.

Cabaret Voltaire Home of Dada up for sale for CHF13m

The home of Dada, Cabaret Voltaire, is looking for a patron with deep pockets to keep the anarchic art movement alive in Zurich.

Sophie Taeuber-Arp From obscurity to the CHF50 note

If you look at a CHF50 bank note, you will see the face of Swiss artist Sophie Taeuber-Arp. Long neglected, this pioneer of modernism is now the ...

A new exhibition in Manhattan, themed around the topic of destruction, explores the lasting impact of Swiss artist Jean Tinguely. The three-part ...

By Karin Kamp in New York 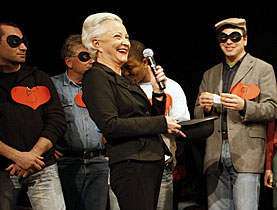 A women's sexual therapist has aroused consternation in Zurich by publicly casting men for the role of sex servants to service her clients. ...