In a shock upset, world tennis number one, Switzerland's Roger Federer, has lost to unseeded Argentinian David Nalbandian in the final of the Madrid Masters.

It was Nalbandian's first Masters Series title and Federer's first loss on indoor hard courts since Nalbandian beat him at the Masters Cup in Shanghai nearly two years ago.

Federer made light work of the first set, but lost his serve in the second game of the second set and went on to make a number of unforced errors.

Nalbandian broke Federer's serve again in the final set to win the match.

In other tennis news on Sunday, Belgian Justine Henin has won the Zurich Open, beating French teenager Tatiana Golovin 6-4, 6-4 in the final of the women's event.

It was Henin's ninth WTA title of the season and her 20th consecutive win in 13 tournaments.

"It's been the best season of my career, and to win my ninth title of the year is pretty amazing," the Belgian said in an on-court interview.

Henin, who went into the final injured, admitted that she had struggled initially as Golovin put her under pressure.

"I needed a bit of time to come into the match today... but slowly and surely I came back."

Golovin started aggressively and took an early 3-1 lead. But Henin fought back to level the score, and went 5-4 ahead in the first set as the French teenager hit three unforced errors.

Henin then broke ahead in the second set and finally won with an ace on her first of two match points.

World number one Henin was top seed at the event, which is Europe's most important indoor women's tournament with prize money of $1.3 million (SFr1.53 million).

The Zurich Open was this year without two popular crowd-pullers – defending champion Maria Sharapova of Russia and Switzerland's Martina Hingis.

Patty Schnyder and Timea Bacsinszky flew the flag for Switzerland but were knocked out in early stages.

The world number one, Roger Federer, will be back in action again on Tuesday at his home tournament in Basel – the Swiss Indoors.

Federer, who was once a ball boy at the event and is now the defending champion, is set to meet Michael Berrer of Germany (ATP rank 54) in his first match on Tuesday.

The Swiss Indoors was first staged in its own air hall in 1970. The top prize was a wristwatch. 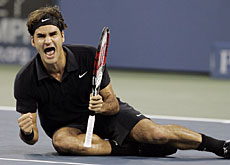 Federer pips them all in the Big Apple Swiss tennis dream over in Zurich

Local favourite Martina Hingis has been knocked out of the quarterfinals of the Zurich Open, losing to third-seeded Russian Svetlana Kuznetsova, ...