Swiss voters' clear decision on Sunday to ban the construction of minarets has generated a wide range of emotions, from stunned joy to rueful concern.

Supporters of the initiative said the Swiss electorate wanted to put a brake on the Islamicisation of their country, whereas opponents were concerned about the violation of rights, not to mention an international backlash and possible boycott of Swiss products.

"Forced marriages and other things like cemeteries separating the pure and impure – we don't have that in Switzerland and we don't want to introduce it," said Ulrich Schlüer, co-president of the Initiative Committee to ban minarets.

Oskar Freysinger, a member of the rightwing Swiss People's Party and a driving force in the campaign, said he was "stunned and dumbfounded" by Sunday's result "since the entire establishment was against us".

"I would like to say to all the Muslims listening that this will in no way change their right to practise their religion, to pray or to gather [in mosques]," he said. "However, society wants to put a safeguard on the political-legal wing of Islam, for which there is no separation between state and religion."

The president of the People's Party, Toni Brunner, said voters had clearly rejected the idea of parallel societies and the further expansion of Islam – including radical, political Islam – in Switzerland.

According to final results, 57.5 per cent of voters and a majority of cantons backed the initiative – up from 34 per cent last month. Turnout was high at around 53 per cent.

Brunner said people who settled here had to realise that they couldn't turn up to work in a head scarf or get special dispensation from swimming lessons.

The government said in a statement it respected the decision.

For Justice Minister Eveline Widmer-Schlumpf, the outcome reflected fears among the population of Islamic fundamentalist tendencies, "which reject our national traditions and which could disregard our legal order".

"These concerns have to be taken seriously. The government has always done so and will continue to do so in future. However, we take the view that a ban on the construction of new minarets is not a feasible means of countering extremist tendencies," she said.

Widmer-Schlumpf underlined that Sunday's vote was only directed against the construction of new minarets. "It is not a rejection of the Muslim community, religion or culture. Of that the government gives its assurance."

Nevertheless, Saida Keller-Messahli, president of the Forum for an Advanced Islam, said the public's fears had been too great and "hatred had won over reason".

She said there would now be legal consequences, since the ban violated the freedom of religion.

The Federation of Islamic Organisations in Switzerland also regretted the result, saying the propaganda of the campaign supporters had succeeded in frightening the majority of voters.

The federation said it was too soon to judge the negative social and legal consequences – what was important now was to strengthen their public relations and clear up any misunderstandings or prejudices concerning Islam.

"Switzerland has lost," said Rifa'at Lenzin from the European Project for Interreligious Learning in Zurich, adding that the country was "leading the way" for Islamophobia.

Lenzin was only partly surprised by the result, "which corresponds to the current mood". She said she was astonished, however, that the "subjective and far-fetched arguments" of the minaret opponents had found such great support.

She added that the opponents of the initiative had completely underestimated the situation and that the political parties had been asleep, with only the centre-right Radical Party actively campaigning. The public spaces had been dominated by the campaign supporters, she said.

Reinhard Schulze, a professor of Islamic studies at Bern University, said he was "very surprised" by the acceptance of the initiative.

He described the result as a "turning point", in that after many years of going in the other direction, voters had once again spoken for an unequal treatment of faiths.

"The next thing is obviously to look at how this plays with international law," he said, adding that he could already envisage complaints from the European Court of Human Rights in Strasbourg.

The Council of Religions, a body comprising Christian churches, Jews and Muslims, said in a statement it regretted the result. People of all faiths must work together even harder, it said, for the respect of rights of freedom, for dialogue with the Muslim community and for integration.

"These are values that make Switzerland strong," it said.

Looking at political reaction, the centre-left Social Democratic Party warned in a statement against the exclusion of Muslims in Switzerland.

"The yes vote was probably the result of a diffuse fear of a religious minority," it said.

This fear must be taken seriously, it added, but it must not be misinterpreted as a vote of mistrust against all Muslims living in Switzerland.

The party said it was also concerned about Switzerland's image abroad, saying that a foreign ministry offensive was clearly necessary, along with stronger integration efforts at all state levels.

Jacques Neyrinck from the centre-right Christian Democratic Party stressed that Switzerland would be the only country in the world to ban the construction of minarets.

"Switzerland is heading straight for a battle with Islam," he said, adding that he feared a boycott of Swiss products.

The four minarets already attached to mosques in the country are not affected by the initiative, and the president of the Islamic community in Langenthal, canton Bern, assumed his organisation would be able to add a minaret to their mosque since it had already been approved.

Mutalip Karaademi said he was disappointed by the strong level of support and the "dirty campaign", describing Muslims and Islamists and terrorists.

But Langenthal mayor Thomas Rufener, from the People's Party, said he didn't think the minaret would be built "for political reasons".

A minaret initiative was handed in to the government in July 2008 after more than the required 100,000 signatures were collected. The text is only one sentence long: "The building of minarets is forbidden."

The government's response, calling on the electorate to reject it, was much longer, running to 50 pages. In essence, the cabinet argues that the prohibition of the spires, usually found outside mosques, would violate international human rights norms. It also said that a ban would hinder integration and would be ineffective in the fight against extremism.

The country's Muslim community says it is stunned by what it sees as an "Islamophobic" move, which it warns will undermine already fragile relations.

Both the Protestant and Catholic churches rallied to their defence, along with most political parties, human rights experts and a number of cabinet ministers.

In Switzerland, only the mosques in Geneva, Zurich and Wangen near Olten have a minaret, Winterthur's mosque only has a small one. But the call to prayer is not made from these minarets.

Building applications for minarets in at least two other towns, Langenthal and Wil, led to heated debates at the local level. 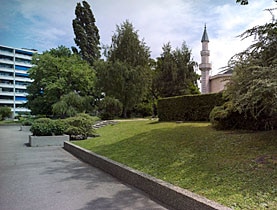 The Swiss have approved a ban on the construction of minarets, according to incomplete results of voting on Sunday. The gfs.bern polling ... 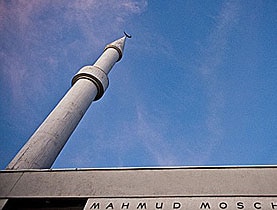 A proposal to ban the construction of minarets appears to be winning support, but is still some way short of a majority, according to the latest ... 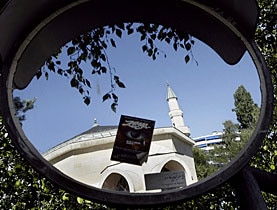 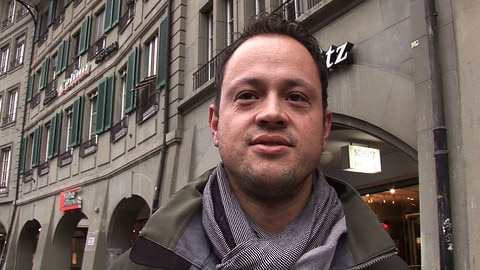