The Swiss model of democracy built around 26 powerful cantons and a relatively weak federal government has given way to a more centralised system, researchers argue in a new book.

The researchers say only two principal features – the relative autonomy of Swiss communities, which even have an important say over who can become a citizen of the country; and the possibility of changing laws through citizen-led initiatives and referendums – truly distinguish Switzerland from other federalist systems today.

Change has come through rising urbanisation, mobility and globalisation, according to the authors of “Swiss Federalism”, edited by Swiss political science researchers Sean Müller and Anja Giudici. The book argues that Swiss federalism must adapt to the times.

But perhaps the most surprising feature of these changes is "the significant process of centralisation" that has occurred in Swiss federalism, which contrasts with popular views of Switzerland as a highly decentralised country, writes one of the co-authors, Paolo Dardanelli, a senior lecturer in comparative politics at Britain’s University of Kent.

"In both cases, centralisation has principally involved the legislative sphere, while in the administrative and fiscal areas the respective federal units – the Swiss cantons and the American states - have retained considerable autonomy", he concludes, adding that the Swiss and German parliaments are more similar.

A national conference on federalism, scheduled for late October in Montreux, asks whether Switzerland will remain a federalist system 50 years from now. The book does not answer that question, but lays out the challenges ahead – and could help shape public opinion.

That might be an important contribution, given the results of a survey conducted ahead of the conference showing that 35% of the 1,200 respondents had only a vague notion of what federalism means.

But most say don’t tinker with it; 72% of the respondents said they believe the current system should not be changed or, at most, needs only small adjustments.

For now, the book is available only in Italian. "But that's also federalism," Müller, a researcher at the University of Bern, said with a smile while referring to Switzerland’s use of four official languages: German, French, Italian and Romansh.

The Cantons: the key to Swiss federalism (Adrian Vatter);

The dilution of the political outlines of the Swiss Cantons (Daniel Bochsler);

Centralisation by the back door? Swiss federalism in schools: origins, evolution and contemporary challenges (Anja Giudici);

The number of issues put to vote has increased considerably since the 1970s. The graphics present more than 600 nationwide votes since 1848.

Geography of federalism Has Switzerland’s 26-canton model had its day?

From time to time there is talk in Switzerland about creating larger cantons. Yet such ideas never seem to gain traction. 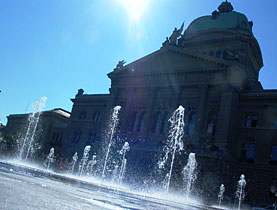 The state of Switzerland is based on the principle of federalism. Federalism in this case means that the member cantons retain a large degree of ...