Xavier Comtesse, who heads the western Swiss branch of Avenir Suisse, says Calvin stood for morality in the granting of credit, but also for protection of the personal sphere.

This year marks the 500th birthday of the religious reformer whose ideas shaped the Protestant Church. In his honour Protestant denominations have designated 2009 Calvin Year.

Calvin, who spent much of his time working in Geneva, not only influenced democracy in Switzerland but modern-day thinking on both moral and financial matters, Comtesse believes.

swissinfo: What is the basis of Calvin's Protestantism?

Xavier Comtesse: It is based on the Bible written in the language of the people, on the separation of church and state, and on the understanding that the grassroots faithful - who fund the community - choose their own priests.

This Calvinist form of institutional organisation has also over time had an influence on non-religious areas of the Swiss mentality. All state institutions remain separate from religious ones, and bottom up participation in political decisions continues from communal to national level.

Both lead to an emancipation of the people, an 'empowerment', as we say today.

swissinfo: What would Switzerland look like today without Calvin?

X.C.: I don't think we'd have direct democracy without this popular emancipation that was spurred on by Calvin. We would probably be a republic [with an elected president], like our neighbours. Of course when talking about German-speaking Switzerland we should mention [Zurich reformer Huldrych] Zwingli just as much as Calvin.

This communication from community organisations up to the highest state level is typical for us Swiss.

swissinfo: To what extent was Geneva more significant than Zurich?

X.C.: In those days French-speaking Switzerland did not exist. Geneva was the place to be – across the whole country. Basel was worth considering, but Zurich wasn't. Neither was Bern nor Lausanne.

That is also why Calvin is rated so much more important internationally than Zwingli. Even in the post-Napoleonic period Zurich was smaller than Geneva both in the number of inhabitants and economically.

swissinfo: How did Calvin stamp the mark of the Reformation and the image of Switzerland on the world?

X.C.: I know most about his influence on the United States. There Calvinism is very pronounced with around 15 million Calvinists – called Presbyterians in Anglo-Saxon countries.

There are also communities in Scotland and South Korea. Worldwide there are said to be around 50 million Presbyterians. But there are very few of them in Switzerland.

swissinfo: What was Calvin's influence on the economy and banking?

X.C.: As a reaction to the papal selling of indulgences as a mean of raising money for Rome, Calvin was one of the first church leaders to permit the granting of loans with interest – albeit tied to high moral standards.

That forged a link with the present: extortionate interest didn't come into question, therefore the loans had to be cheap. As in religion and politics, the thinking behind this banking was to protect the citizen through high moral standards.

Also considered worth protecting by Protestantism was the personal sphere. Add this to being able to bank and you get banking secrecy.

X.C.: Exactly. And that's why there are many misunderstandings concerning the term. The description 'banking secrecy' is actually incorrect – 'protection of the private sphere by the bank' would be more appropriate.

Such legal protection is not unique to Switzerland. In France for example a wife has no right to any information about her husband's bank account – French legal law considers that his private sphere.

We Swiss simply go one step further. We protect against any state despotism. This way of thinking has historical roots in Protestantism, which in Calvin's time sought to protect the people against the despotism of the powerful Catholic Church.

swissinfo: What remains from these Calvinist ethics today – bearing in mind the drama playing out in the world of banking and finance?

X.C.: At the moment we're in a moral crisis. As a result we'll soon have to grapple more with social responsibility.

That will be a form of secular Calvinism with new, still moral, but no longer religious characteristics. Regarding quality for example – new ISO standards in the area of quality attempt to rectify deficits in the area of responsibility.

The International Organization for Standardization (ISO) is based in Geneva – like many other international institutions. This is also part of Calvin's legacy.

Another 'Geneva' institution is the World Wide Web – invented at Cern. This also works 'Calvinistically' insofar as it enables direct access to information to the population, or rather the user.

Until now, powerful intermediaries were needed for this access. The internet has reformed access to the markets – similar to Calvin's reformation of direct access to God.

Comtesse, a Protestant, was born in Neuchâtel and studied in Geneva at Calvin College. He has lived in Geneva ever since.

April 24-October 31: "A day in the life of Calvin" exhibition at International Museum of the Reformation, Geneva 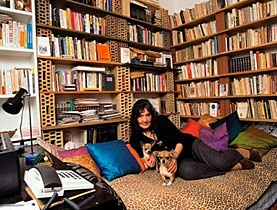 "Revolutionary whore" to rest alongside Calvin

A decision to transfer the tomb of a former prostitute to Geneva's most prestigious cemetery, where Jean Calvin is buried, has sparked ... 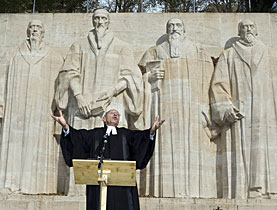 Switzerland's Protestant churches have launched the 500-year celebrations of the birth of John Calvin, a formative figure in the Reformation. The ... 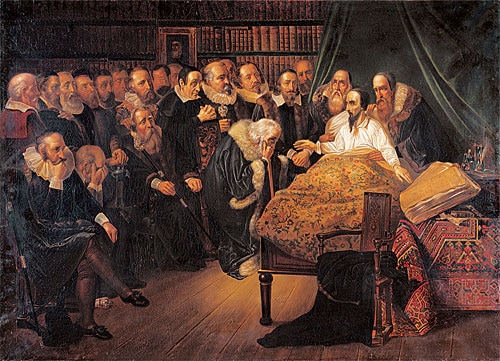 Geneva: Protestant in mind but not in body

The city of Calvin may have been one of the birthplaces of the Reformation but Geneva ceased to be home to a Protestant majority a long time ago. ...

Commemorating a Church reformer Born on June 10, 1509 in France, John Calvin is most closely associated with Geneva where he ministered for most ...