A pair of non-matching telephone boxes side by side and the post office with two postal codes above the door tell you there's something rather special about Büsingen.

The picturesque village that lies on the River Rhine near Lake Constance is certainly out of the ordinary. It is a tiny German enclave totally surrounded by Switzerland. Politically, Büsingen belongs to Germany but economically it's very Swiss.

Local mayor Gunnar Lang, who was brought up in the village has been in the job for the past 17 years and is proud of the place and its unique role.

But what does a mayor do in a community of about 1,450 people, many of whom work in the nearby Swiss city of Schaffhausen?

Lang smiled at me when I put that question to him in the modern municipal offices that indicate Büsingen is fairly prosperous.

"The good thing about this job is that you're responsible for everything, like in a big family," he said.

For example, "his" offices offer all the administrative services that you could want.

"We have a land and property register here and we have a register office. You can get married here and register births. We can cover everything."

What Lang can't do - although he's tried hard - is to prevent the exodus of locals, mainly because of two "serious" problems.

"One is that we are subject to the relatively high German income tax... and we're not very competitive with the surrounding Swiss communes."

A second problem is that those village residents working in Schaffhausen are obliged to have Swiss health insurance.

"Unfortunately the Swiss demand from people who live in the EU a higher health insurance contribution than in Switzerland. Many people are therefore doubly burdened."

"Since I've been in office I've tried to make the income tax bearable but my position is not very strong because income tax is decided in Berlin, and who listens to a mayor from such a tiny village?" he asked.

The reverse side of the coin is that when people retire, the tax situation is turned around and the German tax is in most cases more advantageous than the Swiss.

That has led to a situation in which Swiss pensioners are attracted to Büsingen.

Local farmer Andreas von Ow also spoke of the pros and cons of living in Büsingen. One disadvantage is in bookkeeping because he has to do accounts in two different currencies - the Swiss franc and the euro.

"I am accountable to the German state. I do that in Swiss francs because all the expenditure comes from Switzerland. But I also have a German account for compulsory insurance, taxes, telephone and such things, which have to be made in euros," he said.

Down the road at the local hotel, the lovingly renovated and dignified Alte Rheinmühle (Old Rhine Mill), manager Andreas Fischer also pays part of his taxes to Germany and part to Switzerland.

And for the employees there are two different social security systems. There are other peculiarities too.

"It's very special because people who come to the hotel can't believe they're in Germany in the European Union, yet they have to pay in Swiss francs. That's the way it is," he said.

Walking around the village, you can spot the local coat of arms here and there. It features a bunch of grapes, which weren't grown any more up until fairly recently.

Farmer von Ow volunteered to remedy that and was given the job of planting vines on municipal land in the 1990s, but it was no easy task.

"We had to ask first for permission from Germany and they said it was nothing to do with them, and then from Switzerland, which gave us approval. We've now had an entry in the Swiss vineyard register since 1993," he said.

I've never heard a vintner say his wine wasn't good and so mine is certainly good. I'm convinced it's very good."

His first vintage was bottled in 1997 and he now produces about 7,000 bottles of Riesling Sylvaner (Müller-Thurgau) and Blauburgunder a year, mostly sold in local shops and restaurants.

And then... there's the menu in the Alte Rheinmühle hotel that has to be put together for both Swiss and German customers.

"The things they like to eat are really different. For example, German people coming on Sunday want to have a nice piece of veal or beef with perhaps Spätzli (egg noodles). The Swiss prefer to have some fish and more the French cuisine," Fischer explained.

"We have to see to it that both are happy with our menu and also our prices because most southern German restaurants are a little bit cheaper than ours. The reason is that we have to buy our food and beverages in Switzerland and there the prices are higher."

Even taste in newspapers differs.

"You can't live without a Swiss and a German newspaper. We have two local newspapers but they are totally different. We have the Schaffhauser Nachrichten and the Südkurier that is from Konstanz. Both have parts about Büsingen in them so we look at both."

Büsingen has bathed in its special status for many years and since it pays indirect taxes to Bern - VAT, tobacco tax, spirit and others – it receives about SFr1.75 million ($1.6 million) back.

"This is a lot of money for a small village," concedes mayor Lang, "but you also have to take into account that we have special expenditures that no other German community has."

These include giving about SFr700,000 to Switzerland for school fees and SFr100,000 so that Büsingen can maintain Swiss postal bus connections.

Wouldn't life by much easier if Büsingen were a part of Switzerland? Lang said there would be certainly advantages if there were clear conditions.

"You'd have to change the constitution in both countries to accomplish this ... and therefore I think it's not realistic.

"It would be a dream and one should not dream too much in politics," he remarked.

The story of how Büsingen became a German enclave is complex. The village once even belonged to Austria.
Wars over the centuries complicated the general border situation of canton Schaffhausen.
After the Second World War, 96% of Büsingen residents demanded integration into Switzerland.
As there were differences of opinion between Germany and Switzerland about the whole area, Büsingen has remained a German enclave.

The village size is 7.62 sq km or about four times bigger than the principality of Monaco. The length of its border is 17.141 km.

123 boundary stones mark the border between Büsingen and the surrounding Swiss communities.

The municipal administration is housed in what is known affectionately or not as "the glass palace".

Although Büsingen belongs to the administrative district of Konstanz, it has its own car number plates, which begin with BÜS.

You can only reach the village from Germany by crossing the Swiss border. From Switzerland, you can reach it without border controls.

Under the treaty between Germany and Switzerland which came into force in 1967, Büsingen is integrated into Swiss customs territory.

Switzerland is responsible for food and supplies for the population of Büsingen in a state of emergency.

In health care certain sectors, for example the inspection of food and drugs, also fall under Swiss law. 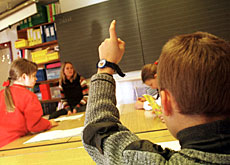 In brief Switzerland is a mountainous republic in the centre of Europe. It is bordered by Italy, France, Germany, Austria and Liechtenstein. The ...