Switzerland destroyed tens of thousands of cluster bombs last year and looks set to eliminate its stockpile in 2018. But some states continued to use the deadly munitions, mainly in Syria and Yemen, causing 971 causalities globally – double the previous year’s toll.

Last year, Switzerland destroyed 55,410 cluster bombs and 2,752,193 sub-munitions from its stockpile. This was in accordance with the Convention on Cluster Munitionsexternal link, which Switzerland ratified in July 2012, the Landmine and Cluster Munition Coalition reported on Thursday. It sends the projectiles to a disposal firm based in Germany.

Cluster munitions are weapons deployed from the air or launched from the ground that release hundreds of smaller sub-munitions but are imprecise and unreliable, killing and injuring even after conflicts are over.

“Switzerland is on track to complete destruction in 2018, in advance of its January 1, 2021 deadline,” said Mary Wareham, arms advocacy director for Human Rights Watch (HRW) and editor of the Cluster Munition Monitor 2017external link.

The Swiss munitions were purchased from Britain and Israel and reassembled in Switzerland, where special features were added to make them more reliable, according to the coalition. The stock is considered a last vestige of Switzerland’s defence policy to protect the country during the Cold War, when there were fears of an attack by Warsaw Pact countries. The Swiss army plans to keep a small stock of 50 cluster munitions and 2,600 sub-munitions for training purposes when the stockpile destruction is complete.

While 119 countries have now signed up to the convention and are slowly meeting their treaty obligations, they do not include important players and producers like the United States, China, Russia and Brazil.

Last year, cluster bombs continued their deadly toll. Casualties from the internationally outlawed weapons more than doubled in 2016 compared with the previous year. The Cluster Munition Coalition said 971 people (98% of whom were civilians) were reported killed or injured by the bombs. However, activists say the real number is likely to be much higher.

Most of the increase was linked to the conflict in Syria (837 deaths), where Syrian government forces began using the weapons from September 2015 with Russia’s support. Russia has neither denied nor confirmed using cluster bombs.

Dozens of other casualties and injuries were caused by the Saudi-led bombing of Yemen. But deadly munitions buried in Laos from the American bombing of that country during the Vietnam War in the 1960s and 1970s led to 51 deaths, the monitor said.

There is evidence that cluster munitions were also used last year in Libya and Iraq by Islamic State forces, but reports have been difficult to verify independently, according to Mary Wareham. Other countries where casualties from cluster munitions were reported included Bosnia and Herzegovina, Lebanon, Serbia, South Sudan and Vietnam.

On September 4-6, government officials and experts will gather at the United Nations in Geneva for an international review of the convention.

Part of the funds also went towards supporting the Geneva International Centre for Humanitarian Demining.

It also funded specialists taking part in United Nations Mine Action Programmes in the Democratic Republic of Congo, South Sudan and Western Sahara, as well as UN mine-related activities in New York and in Geneva.

The leading Swiss state pension fund, Publica, has announced that it plans to disinvest from five weapons companies. This follows a national ...

Several hundred people have called on Swiss banks and pension funds to stop investing in the weapons industry. The participants of the ...

In an interview with Swiss television, UN panel member Carla Del Ponte has called for President Bashar al-Assad to be brought to justice.

‘Remarkable‘ progress has been made eradicating cluster bombs but they continue to be used in conflicts like Syria and Yemen.

Over 150 financial institutions including Credit Suisse invested $28 billion (CHF26.8 billion) in companies that produce cluster bombs despite an ...

The bank’s portfolio includes investments in manufacturers of controversial weapons like cluster bombs and mines despite pledging in 2013 to ...

Parliament has paved the way for Switzerland to ratify an international agreement banning the worldwide use, production, transfer and financing of ... 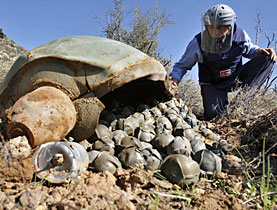 Switzerland has welcomed the draft treaty to ban cluster bombs adopted by more than 100 states meeting in the Irish capital, Dublin. The accord ...