Since 1678 the villagers of Fiesch and Fieschertal in canton Valais have offered prayers to God against the advancing Aletsch glacier that has threatened their homes.

Global warming and the slowly receding ice mass are making them want to reverse their petitions. But for that they need the blessing of the Vatican.

"This is no PR stunt. The situation is serious. Over the past three centuries the glacier has retreated 3.5 kilometres and is about 300 metres thinner," Herbert Volken, the mayor of Fiesch, told swissinfo.ch.

The Aletsch glacier, the largest in the Alps, is 23.6km long, contains 26.5 billion tons of ice and covers more than 120 square kilometres in southern Switzerland. The glacier is located in the Jungfrau-Aletsch-Bietschhorn area, which was inscribed on the World Heritage list in 2001.

But over the past decade Switzerland's glaciers shrank by 12 per cent, melting at their fastest rate due to rising temperatures and lighter snowfalls, a study showed.

"Glacier is ice, ice is water and water is life," Reverend Pascal Venetz from Fiesch said in a recent sermon. "Without the glacier the springs run dry and the brooks evaporate. Men and women face great danger. Alps and pastures vanish and towns die out."

Taming the forces of nature

From the 17th to the 19th centuries the problem was very different. The inhabitants of the alpine villages of Fiesch and Fieschertal suffered countless natural disasters, mostly avalanches and floods from glacial lakes.

To try to tame the forces of nature the local population turned to their faith.

In 1678 the villagers made a formal vow to live virtuously and to pray against the growth of the Aletsch glacier and the flooding of Lake Märjelen, which formed on the east side of the glacier.

The prayer was sent to Pope Innocent XI in Rome for his official approval via the bishop of Sion and the pope's ambassador in Bern.

Since 1862 the locals have also held an annual five-hour procession to Ernerwald chapel on July 31, St Ignatius's feast day, to reinforce their prayers.

But they now want to seek permission from Pope Benedict to reverse the vow.

"We should pray that our glacier does not melt any further, but instead grows, and that the most important thing in life, water, remains well preserved," Venetz told the flock at the Ernerwald chapel.

An official request is being made by the priest and will be sent to the Vatican via the local bishop and the nuncio in Bern.

Fiesch's mayor is convinced the Pope will give them his blessing.

"In his Easter message this year the head of the Catholic Church addressed the issue of climate change. It's a burning global issue," he said.

According to Volken, the impact of climate change on local industry is not that serious.

Hotels and other accommodation in the village of Fiesch, which has around 1,000 residents, register more than 400,000 overnight stays a year.

"These visitors have a specific destination: they come to admire the largest river of ice in the Alps, the Aletsch glacier," said Volken.

In summer over 2,500 tourists a day take the cable car to the top of Fiesch Eggishorn (2,934m), which has a panoramic view of the glacier and dozens of 4,000-metre peaks in the Valais Alps.

"If this melts, we'll have no other way of sustaining our livelihood. Tourism and water - that is what we live from. Tourism is our only source of income and if it doesn't prosper here at Fiesch we do badly. We have a small, successful industrial park, but it is also closely linked to tourism," said Volken.

The residents of Fiesch and Fieschertal are optimistic that the audience with the pope will happen in September or October.

And if all goes to plan, Volken has a PR idea up his sleeve that should have a major impact.

"I'm going to invite the Pope to visit the Aletsch glacier. And as a trained mountain guide, I can give him a personalised guided tour," he said.

Glaciers are large masses of snow, ice and rock debris that accumulate in great quantities and begin to flow outwards and downwards under the pressure of their own weight.

They are formed when yearly snowfall in a region far exceeds the amount of snow and ice that melts in a given summer.

In Switzerland, glaciers play an important role as water reservoirs for hydro-power production (generating 50% of the country's electricity). They are also considered an important tourist attraction.

Glaciers around the globe have been shrinking significantly since the second half of the 19th century, according to the Swiss-based World Glacier Monitoring Service.

It said there were strong glacier retreats in the 1940s, stable or growing conditions around the 1970s, and again increasing rates of ice loss since the mid 1980s.

Under current climate scenarios presented by the Intergovernmental Panel on Climate Change (IPCC), the ongoing trend of worldwide and rapid, if not accelerating, glacier shrinkage...may lead to the deglaciation of large parts of many mountain ranges by the end of the 21st century.

Switzerland's glaciers lost 18% of their surface between 1985 and 2000. In the Alps, the average loss has been 22%. Swiss glaciers are melting more slowly because most are at high altitude.

Meltdown first affects smaller glaciers – which represent 18% of total glacier surface but nearly half the losses incurred – according to a 2004 study from Zurich University. 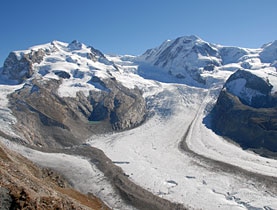 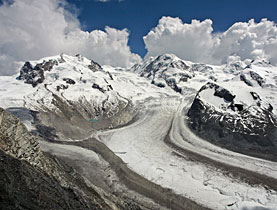 Eighty-two of 88 glaciers measured in Switzerland between 2007 and 2008 reduced in length, according to scientists at the Federal Institute of ... 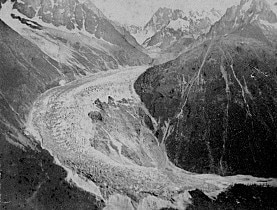 Glaciers seen through the eyes of Old Masters 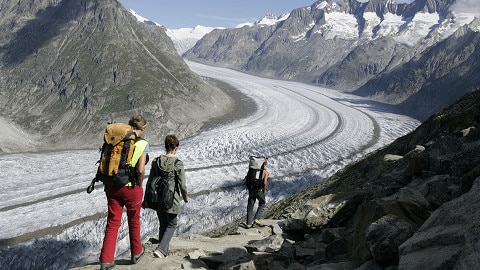