Laos has expelled the director of the Swiss non-governmental organisation Helvetas, accusing her of criticising the government in a letter to donors in which she criticised the one-party regime for stifling public debate and making work for aid groups difficult.

Anne-Sophie Gindroz, the NGO’s country director, was given on Friday 48 hours’ notice by the authorities to leave.

According to Helvetas spokesman Matthias Herfeldt, who confirmed reports in the Sunday papers the Sonntagszeitung and the NZZ am Sonntag, she arrived on Sunday in Bangkok, while her husband and children are still in the Laotian capital Vientiane.

She was officially expelled because the government was “dismayed” by her “improper behavior” and “unconstructive attitude” towards Laos. The trigger for the decision was a letter she wrote to donor nations and other organisations before a meeting on aid to the country.

Gindroz criticised in the letter the Lao government as creating a hostile environment for development and civil society groups by stifling freedom of expression and association.

“We are working in a challenging environment: this is a country governed by a single-party regime, where there is little space for meaningful democratic debate, and when taking advantage of that limited space, repercussions follow,” she said at the time according to Radio Free Asia.

In an e-mail quoted by the broadcaster and sent on Friday, Gindroz told colleagues and friends she did not regret writing the letter or for speaking out.

The letter may have played a role in the decision by the 42 organizations and 35 countries involved in the donor meeting to impose stricter conditions on aid. The aim is to guarantee efficiency and transparency, particularly on infrastructure projects and to deter possible corruption.

The Laos foreign ministry’s decision was explained to Helvetas’ executive director in Zurich in a written notice, stating Gindroz’ letter had “demonstrated her explicit rejection of the Lao PDR’s Constitution and law, particularly its political system.”

However Helvetas is allowed to pursue its work and has been asked to send a new country director.

The NGO has been running an agricultural advisory service in Laos since 2001. It also helps promote organic farming, marketing farmers’ produce and preserving traditional agricultural practices.

Helvetas spokesman Herfeldt said the organisation would maintain its programme, which operates on an annual budget of SFr3.4 million ($3.6 million).

He added that the expulsion is unusual and that Helvetas had asked for further explanations with the support of the Swiss government. The Swiss ambassador in Thailand, who is also responsible for Laos, has made contact with the Lao authorities.

Laos is one of the planet’s least developed nations. According to Helvetas, it is predominantly rural and one third of the population still lives in poverty despite slow moves from the government to develop a "social" market economy.

The nation is also one of Switzerland’s biggest recipients for development aid in Southeast Asia. Early last month, the then-president Eveline Widmer-Schlumpf and Foreign Minister Didier Burkhalter signed a cooperation agreement with the Lao government.

Swiss aid is expected to increase from SFr14.5 million to SFr21 million by 2016.

Foreign donations are helping cut the number of injuries and deaths from cluster munitions in Laos - per capita the most heavily bombed nation in ... 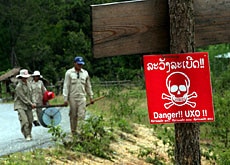 A Swiss-based demining organisation has announced a two-year operation to clear hundreds of hectares of farmland in Laos heavily contaminated by ...

Switzerland works to improve prospects for people all over the world. Since 1961 Swiss development cooperation works in areas including climate ...