Swiss food multinational Nestlé has ordered the recall of baby milk products from five European countries due to ink contamination from the packaging.

The recalls in Italy, France, Spain, Portugal and Greece follow the confiscation of 30 million litres of milk by the Italian authorities. Tetra Pak in Holland confirmed it had produced the faulty packaging.

The traces detected, which came from ink used in the packaging, pose no risk to health, said a spokesman at Nestlé corporate headquarters in Vevey.

He added that the amount recalled in Italy totalled two million litres and that the amounts seized in the other countries were significantly less. The brands concerned are Nidina 1, Nidina 2 and Latte Mio.

The recall was announced after food-safety officials in Rome discovered that a batch of milk due to expire in September 2006 had been contaminated by a chemical that leaked from the packaging.

The Dutch subsidiary of the Swedish packaging company Tetra Pak confirmed that it had produced the packaging for the recalled products.

A Tetra Pak spokeswoman said the firm was aware of the problem and had changed its production methods in September.

Nestlé's Italian headquarters in Milan said in a statement that the substance found in its milk brands – identified as Isopropilthioxantone (ITX) – is not dangerous to health.

"This decision was taken as an extreme precautionary measure to reassure consumers, even if ... Nestlé believes that the level of ITX measured in the tested products does not represent a health risk," the statement said.

Nestlé said it had withdrawn the milk in question form the Italian market and that new liquid milks using alternative packages had since been distributed.

European Union food safety experts believe the ink traces detected in the baby milk do not appear to present a risk to human health, the EU said on Wednesday.

"It is not likely to present an immediate health risk at the levels reported," said EU health spokesman Philip Tod.

However he said the presence of ITX in food is considered "undesirable" by the EU's Food Safety Authority based in Parma, Italy.

Italian officials said they had already seized about two million litres of Nestlé baby milk earlier this month after finding traces of ITX, used in the offset printing process of Tetra Pak cartons.

The faulty packaging that caused the contamination was produced by the Dutch subsidiary of the Swedish company Tetra Pak.
The brands concerned are Latte Mio and Nidina 1 and 2.
This is the second time Nestlé has run into difficulties with Italian authorities this year.
In October, Italy's antitrust authority fined seven producers of baby formula, including Nestlé, a total of €9.7 million (SFr15 million) for price fixing. 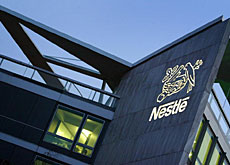 The Nestlé food giant has reported that its first-half net profit jumped by 32 per cent over last year's figure to SFr3.68 billion ($2.93 ...