An election campaign video pulled by YouTube for violating its hate speech policy has become the subject of an investigation by the Zurich public prosecutor’s office.

According to the German-language newspaper NZZ am Sonntag, the Zurich public prosecutor’s office initiated a criminal investigation last Monday into unknown persons suspected of violating the laws on racial discrimination.

+ See the results from the October 20 electionsexternal link

Rejected Eritrean asylum seekers may still be deported to their home country even if they face being called up for compulsory national service.

The SVP posted it on various social media platforms on October 3, 2019. YouTube blocked the video on October 9, two weeks before the parliamentary elections. Switzerland’s largest political party defended the video, with the head of the Zurich SVP chapter arguing that it was not racist but rather part of an “information campaign”.

The Eritrean media service in Switzerland opened a criminal complaint against the SVP for the video in the middle of October.

Refugees from Eritrea have represented the largest foreign community seeking asylum in the alpine country in recent years. However, since 2017, Switzerland has steadily tightened its admission criteria for Eritrean asylum seekers.

In January 2017, the federal administrative court ruled that Switzerland will no longer recognise Eritreans as refugees solely on the grounds of having fled their country illegally. Later that year, the same court ruled that deserters were not at risk of inhumane treatment and that the same applies to those who have already lived abroad for several years.

The SVP has a history of using provocative messages and analogies to rally support during elections. In the most recent parliamentary elections, the party drew criticism for featuring an apple being eaten by worms adorning the colours of the European Union and of the other main political parties.

In 2004, the party’s campaign poster of three white sheep booting a black sheep out of the country drew fire and was denounced by the Swiss president at the time as racist.

A campaign poster for the conservative right Swiss People's Party is dividing opinion even within the party.

By swissinfo.ch and RTS

Repatriation policy Call to speed up deportation of Eritreans rejected

The Swiss parliament stops short of forcing the government to open talks with the Eritrean authorities on a repatriation accord.

The United Nations Committee against Torture has ruled against the expulsion of an Eritrean national from Switzerland to Italy. 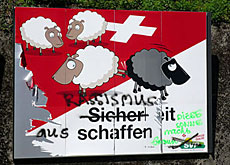 Veronica Almedom, who arrived in Switzerland from Eritrea as a baby, is now a member of the Federal Commission on Migration.