Donald Rumsfeld, the US secretary of defence, was on the board of technology giant ABB when it won a deal to supply North Korea with two nuclear power plants.

Weapons experts say waste material from the two reactors could be used for so-called “dirty bombs”.

The Swiss-based ABB on Friday told swissinfo that Rumsfeld was involved with the company in early 2000, when it netted a $200 million (SFr270million) contract with Pyongyang.

The ABB contract was to deliver equipment and services for two nuclear power stations at Kumho, on North Korea's east coast.

Rumsfeld - who is one of the Bush administration's most strident "hardliners" on North Korea - was a member of ABB's board between 1990 and February 2001, when he left to take up his current post.

Wolfram Eberhardt, a spokesman for ABB, told swissinfo that Rumsfeld "was at nearly all the board meetings" during his decade-long involvement with the company.

However, he declined to indicate whether Rumsfeld was made aware of the nuclear contract with North Korea.

“This is a good question, but I couldn’t comment on that because we never disclose the protocols of the board meetings,” Eberhardt said.

“Maybe this was a discussion point of the board, maybe not.”

The defence secretary’s role at ABB during the late 1990s has become a bone of contention in Washington.

The ABB contract was a consequence of a 1994 deal between the US and Pyongyang to allow construction of two reactors in exchange for a freeze on the North’s nuclear weapons programme.

North Korea revealed last year that it had secretly continued its nuclear weapons programme, despite its obligations under the deal with Washington.

The Bush government has repeatedly used the agreement to criticise the former Clinton administration for being too soft on North Korea. Rumsfeld’s deputy, Paul Wolfowitz, has been among the most vocal critics of the 1994 weapons accord.

Weapons experts have also speculated that waste material from the two reactors could be used for so-called "dirty bombs".

Rumsfeld's position at ABB could prove embarrassing for the Bush administration since while he was a director he was also active on issues of weapons proliferation, chairing the 1998 congressional Ballistic Missile Threat commission.

The commission suggested the Clinton-era deal with Pyongyang gave too much away because "North Korea maintains an active weapons of mass destruction programme, including a nuclear weapons programme".

From Zurich to Pyongyang

At the same time, Rumsfeld was travelling to Zurich for ABB's quarterly board-meetings.

Eberhardt said it was possible that the North Korea deal never crossed the ABB boardroom desk.

"At the time, we generated a lot of big orders in the power generation business [worth] around $1 billion...[so] a $200 million contract was, so to speak, a smaller one."

When asked whether a deal with a country such as North Korea - a communist state with declared nuclear intentions - should have been brought to the ABB board's attention, Eberhardt told swissinfo:

"Yes, maybe. But so far we haven't any evidence for that because the protocols were never disclosed. So maybe it was a discussion point, maybe not," says Eberhardt.

A Pentagon spokeswoman, Victoria Clark, recently told "Newsweek" magazine that "Secretary Rumsfeld does not recall it being brought before the board at any time".

It was a long time ago

Today, ABB says it no longer has any involvement with the North Korean power plants, due to come on line in 2007 and 2008.

The company finalised the sale of its nuclear business in early 2000 to the British-based BNFL group.

US defence secretary, Donald Rumsfeld, was a member of the ABB board from 1990 to 2001.
In January 2000, ABB signed a $200 million deal for two nuclear power stations in North Korea.
ABB says Rumsfeld “may, or may not have” known about the deal.
The Pentagon says Rumsfeld “does not recall it being brought before the board”.
The power plants were allowed under a 1994 anti-nuclear weapons proliferation deal between the US and North Korea.
The US-North Korean agreement collapsed last month when Pyongyang announced it had reactivated its mothballed nuclear programme.
ABB finalised the $485million sale of its global nuclear business to BNFL in May 2000. 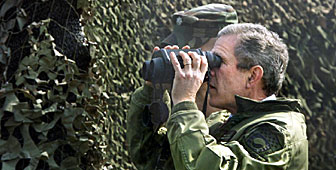 Life for the Swiss observers in the demilitarised zone between North and South Korea has become a lot more eventful in recent months. Security in ...