The endless queues for food bags in Geneva show that while the health crisis seems to be subsiding, the economic crisis has only just begun, warns political journalist Grégoire Barbey. 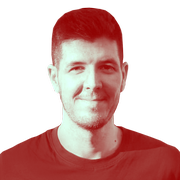 Grégoire Barbey is a freelance journalist. He worked for four years at the newspaper L'Agefi and was also a columnist for La Télé. Passionate about politics, he is very active in Geneva and on social networks. He is editor-in-chief of online news blog affranchi.ch.

Switzerland is slowly emerging from lockdown. Many economic activities have already resumed, and most will be able to re-open on May 11. Although the recovery is eagerly awaited, it will not take place without the observance of protective measures to safeguard public health from the dangers of Covid-19.

Although Swiss efforts have succeeded in curbing the spread of the virus, its presence remains. We will therefore have to live with it, and this will have consequences for the economy. Businesses will not be able to resume with the same freedoms as before, and the constraints that lie ahead will weigh on the income of many sectors.

The financial consequences of the health crisis are difficult to assess accurately. Everyone is making their own predictions. Although they differ in terms of duration and magnitude, they all agree on one thing: the economic slump will have a serious impact on society, and the economy will take time to return to pre-crisis levels. Although the health crisis may last for a while, the economic crisis it caused will outlive it and will undoubtedly last several years.

In the Tribune de Genève, the head of the Geneva café-owners association estimates that around a third of establishments will not be able to re-open as a result of the crisis. The figure is sobering. And catering is not the only sector concerned. Many companies will have no choice but to throw in the towel. Projects will be postponed indefinitely or even abandoned owing to a lack of clear prospects in the coming years.

Debt, the only way out

The difficult decisions taken by the government to limit the transmission of the coronavirus will undoubtedly have saved lives, but paradoxically they will also have indirectly pushed many human lives into poverty or at least into financial uncertainty.

Social insurance will have to cope – and is already doing so – with a wave of new beneficiaries, be it for unemployment or social welfare. Although the government is trying to limit the damage, people will fall through the social safety net and will not get help to support themselves. For many, debt will be the only prospect of survival.

Switzerland, which in recent years has enjoyed fantastic economic wealth and unprecedented success, will in the very near future have to deal with hordes of people in difficulty. Is Switzerland ready to face this challenge? Nothing could be less certain. In this small country that holds itself in very high esteem, failures are not very well received, either culturally or institutionally.

In a country where individual responsibility is established as absolute dogma and where work is an indisputable social distinction, the imponderables of life are the object of all sorts of suspicions. Debt? Obviously a sign of poor financial management. Long-term unemployment? A clear demonstration of laziness and a blatant lack of willpower. Illness? An excuse to rely on the state.

That’s exaggerating somewhat, but it’s not a million miles from reality. Being poor in Switzerland is a cross to bear and one has to prove one’s honesty again and again in order to hope to be considered a human being like any other. In Switzerland, poverty reverses the burden of proof: anyone who receives support from the community is considered an abuser.

Although the economic crisis is still in its infancy, it will be about as severe as the one that followed the Second World War. Perhaps even more so, since the world economy is much more globalised today than 70 years ago. Honest people are going to lose everything, including and above all their jobs, and therefore their financial and social stability and perhaps even their health, since all these elements are closely linked.

This content was published on May 5, 2020 May 5, 2020 The coronavirus pandemic is exacerbating the challenges faced by the estimated 100,000 irregular migrants, also called ‘sans papiers’, in Switzerland.

If Switzerland wants to be able to support the victims of the crisis, it will have to show courage. Because this will mean questioning its own way of working and its view of individual life paths.

It is also at the political level that measures to deal with the economic crisis will be played out. Will parliament and the government be able to make concessions to improve state support? Even though tax revenues are likely to fall significantly as individuals and corporate entities suffer. Confronting this situation will require a high degree of adaptability and, much more importantly, a willingness to question.

Health Minister Alain Berset has constantly reminded us that, when it comes to health, not everything is simple and we must show humility, even if it means going back on positions that have just been taken following new information. Will the political class live up to this demand for humility, even in reference to the economic aspect of the crisis?

Compromises will have to be made on both sides of the political spectrum. The social cohesion of our country must not be undermined by the crisis. That is why it is important to discuss without taboos the measures that will have to be taken to limit the damage and to reduce the pressure on those who will pay the price for this economic cataclysm.

Is it time for an unconditional income mechanism? Do we need to redefine the way prosecutions are kept for five years on cantonal records to reduce the negative consequences of a complicated financial situation? How about reforming social assistance to make it more suitable for a return to the job market rather than turning it into a siding where people are belittled and artificially kept in hardship?

Switzerland is going to face a level of poverty that was unimaginable just a few months ago. The queues for the distribution of basic foodstuffs in cities such as Geneva, where thousands of people queue for hours, are a visible symptom of this.

For a long time Switzerland has had two faces: a presentable one – that of success – and another, darker, one which wanted to keep those left behind in the dark. But since their numbers are going to increase drastically in the coming months, there is no doubt that the time has come to abandon this separation between a Switzerland that wins and a Switzerland that pays the price. The two must come together to form a single nation, whose greatest strength is its ability to show solidarity in the most difficult times.

This is a daunting task for our authorities. Let us hope that they rise to the occasion.