The grounding of national carrier Swissair ten years ago sent shockwaves through Switzerland, and across the country there were calls for heads to roll.

But neither the board nor the airline’s management have been found guilty of mismanagement, even though claims worth SFr3 billion ($3.3 billion) are still pending against them.

The months before the grounding were chaotic. The drama had been slowly unfolding, but nobody really believed that the company would suffer a fatal blow.

However on the afternoon of October 2, 2001, Swissair’s planes were grounded. The once-proud national carrier no longer had enough money in the till to pay airport taxes or buy kerosene for its aircraft.

Around 39,000 passengers suddenly found themselves hostages of the situation. The damage to Switzerland’s reputation was huge. Even today those in charge of the company at the time still blame each other for the debacle.

Corti criticises the major banks and the government for not preventing Swissair’s insolvency. But his opponents say Corti, and the board as a whole, did not have an overview of the whole affair.

"It was clear from the start that any help for the old Swissair would come too late,” said Marcel Ospel, who was then the chief executive of UBS, shortly after the grounding.

Lessons from the debacle

At the time, the notion of "too big to fail" didn’t exist. Seven years later, in autumn 2008, the cabinet used an emergency law to come to the aid of the tottering UBS bank, with a loan of more than SFr6 billion, saving it from bankruptcy and saving Switzerland’s reputation as a financial centre.

Had it not been for the grounding of Swissair, things might have worked out differently.

“I knew that in this sort of crisis situation I had to contact the finance ministry in time,” Peter Kurer, who was chairman of the UBS at the time, told the newspaper NZZ am Sonntag.

“When things got really tight, all the relevant ministers were constantly kept up to date with the information they needed.”

When UBS refused to give Swissair the credit it needed in autumn 2001, Kurer was UBS’s chief legal officer and played a decisive role in the negotiations.

On October 2, 2001 pictures of the stranded aircraft appeared all round the world. The "flying bank", as Swissair was proudly nicknamed for its high liquidity, high returns, the excellent reputation of its core activity and well regarded catering and duty-free businesses, had bitten the dust.

The next day the cabinet did what it had refused to do two days earlier, providing an emergency credit of SFr450 million and giving Swissair the money it needed to get off the ground again.

Facing a SFr17 billion financial hole, the SAirGroup subsequently filed with the courts for a moratorium so it could restructure its debt. Swissair had to be pared down.

After a merger with the regional airline Crossair, the successor company Swiss started operations on March 31, 2002. Together the federal authorities and the banks pumped more than SFr3 billion into the complicated and confused restructuring of the enterprise, including SFr1.7 billion of taxpayers’ money.

Even so, Swiss was never able to reach the heights it was aiming for. There was too much turbulence, and the economic environment was too unstable.

When it was taken over by Germany’s Lufthansa in spring 2005, the company was worth just SFr340 million.

But now as a subsidiary, it is making healthy profits for its German owners.

The story is not yet over for the former board members and management of Swissair. A claim for damages worth a total of SFr3 billion from the Swissair liquidator Karl Wüthrich is still pending against them.

It is not currently clear whether the officials might have to pay those damages from their own private assets or not. Wüthrich himself says it is also open whether the claim will be dealt with in court, or whether there will be a settlement beforehand.

Criminal proceedings came to an end more than four years ago. In June 2007 the regional court in Bülach acquitted all 19 accused – including a considerable number of major Swiss business figures – of all charges.

A result that both the public and the plaintiffs interpreted as meaning that under Swiss law, bad decisions and mismanagement would never be punished.

Rebirth of an airline

Swissair planes were grounded on October 2,  2001, after the company had been in business for 71 years.

The downturn in the aviation market after the terrorist attacks of September 11, 2001, proved the last straw for the heavily indebted Swissair, which folded the following year.

The airline collapsed because it over-extended itself by buying stakes in numerous loss-making airlines, including Belgium's Sabena and Poland's Lot, in an attempt to form its own airline alliance.

The remains of Swissair and the regional carrier Crossair were brought together in 2002 to form the new national carrier Swiss.

After a shaky start which threatened the existence of the fledgling airline, Swiss was taken over by Germany's Lufthansa in 2005. Earlier attempts to join the British Airways-led Oneworld alliance fell through.

Swiss now appears to be on solid ground, booking full-year profits of SFr368 million in 2010, compared with SFr146 million in 2009.

The company has a global workforce of 7,521, around 100 more than for the same period a year earlier. The company plans to recruit a further 200 cabin crew and 100 future pilots before the end of 2011.

After months of wrangling, Swiss International Air Lines and unions representing its 960 pilots have agreed to a new collective labour agreement. ...

Amid signs of a gradual recovery for the airline industry, Swiss International Air Lines is splashing out SFr1 billion ($1.02 billion) on nine new ... 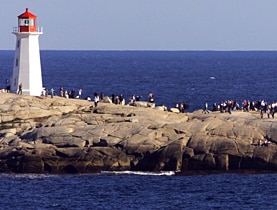 Chief air accident investigator Jean Overney was one of the first Swiss to arrive in Halifax on the morning after the 1998 Swissair crash. He ...

End of a myth

Birth, death and resurrection, from Swissair to Swiss. The grounding of Swissair on October 2, 2001, was the end of national myth and a dark day ...

Grounding anniversary Who is to blame for the collapse of Swissair?

October 2, 2011 marks the tenth anniversary of the grounding of the once proud national airline Swissair. Many of the staff members managed to get ...