Following the Senate in March, the House of Representatives has approved the extension of the Swiss peacekeeping mission in Kosovo. “Swisscoy” will run until the end of 2020.

A majority of parliamentarians on Thursday judged the situation in Kosovo to be still too unstable for a full withdrawal.

Swisscoyexternal link participates within the multinational KFOR operation, headed by NATO since 1999.

That said, the mission will be reduced in size: from the current 235 to an envisaged 165 by 2019, in line with the overall streamlining of the KFOR operation.

Defence Minister Guy Parmelin welcomed the result, speaking of the importance of the mission for the stability of the country, particularly in the Serb-controlled north, where the still-developing authorities in capital Pristina struggle to exert influence.

However, the leftwing Greens and the rightwing Swiss People’s Party reckoned that the costs of the Swiss engagement were not justified. They advocated a complete withdrawal by 2020. The money could be better spent on Swiss security, they say. They also questioned why the 8,000-strong Kosovar police force was not capable of managing the situation.

Switzerland hosts one of the biggest Kosovo expat communities in Europe since the conflict erupted nearly 20 years ago.

Though the country has stopped short of joining UN peacekeeping forces, Switzerland has long supported international peace efforts, and is currently active across various regions of the world, including in Kosovo neighbour Bosnia-Herzegovina.

Switzerland plans to maintain its armed contingent in Kosovo but is reducing the size of the force.

Plans to extend the mandate of the Swiss peacekeeping mission in Kosovo until the end of 2020, while reducing the size of the force has won ...

The Ukraine conflict has marked Switzerland’s year-long chairmanship of the OSCE. Swiss experts and politicians from both the left and right agree ... 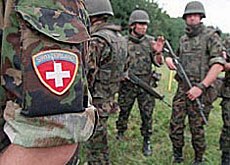 Switzerland's first-ever armed peacekeepers have arrived in Kosovo in a move which sets a precedent for future missions abroad. The troops flew ...