The Geneva Conventions remain highly relevant but it is vital to update certain aspects of humanitarian law, says the International Committee of the Red Cross (ICRC).

The Swiss-run humanitarian agency made the statement ahead of the 60th anniversary of the four Geneva Conventions on Wednesday,which bind 194 countries to basic humanitarian principles during armed conflict.

Together they form the backbone of international humanitarian law (IHL), which places limits on how war is waged.

"The conventions have proven to be highly relevant and useful for the protection of thousands of people," ICRC President Jakob Kellenberger told journalists in Geneva on Wednesday.

But it was crucial to elucidate certain IHL concepts and strengthen certain rules, he added.

In particular, the ICRC president said it was "of vital importance" to define and make clear the distinction between direct participants in a conflict and those not directly involved.

"Otherwise, if the interpretation is too wide, too many civilians become lawful targets; we need a clear, narrow definition," he explained.

Other concepts of the laws of war like military targets and proportionality will also need clearing up for IHL to be operationally applicable.

As most conflicts now take place within state borders rather than between states, and most of the fighting is conducted not by governments but by rebel groups, the conventions and treaties need to be revised.

The ICRC is currently finalizing a study looking at ways of developing treaty law relating to non-international armed conflicts.

"It's quite clear that the non-respect of IHL by non-state armed actors is a big problem," the former Swiss diplomat told Reuters.

Sixty years after the Geneva Conventions were adopted there remain far too many IHL violations, said Kellenberger.

"But I don't think globally that respect for IHL has weakened," he said. "It would be wrong to think that violations are the rule and respect for the law is the exception."

However he explained that over the past ten years his main battle has been challenging those who said IHL was partly no longer relevant.

The war on terror had not helped in this respect and had served as a pretext for certain states not to respect the law, said the ICRC president.

On Wednesday the ICRC will host a diplomatic meeting with representatives from states party to the Geneva Conventions where it will outline its position on the challenges facing the conventions today and highlight ongoing efforts.

The organisation will also present the findings of a new ICRC-commissioned opinion poll on what people in war-torn countries think about the conventions.

The survey, carried out among 4,000 people in Afghanistan, Colombia, the Democratic Republic of Congo, Georgia, Haiti, Lebanon, Liberia and the Philippines, revealed that most people either do not know the treaties exist or say they do not work.

In Liberia 65 per cent of respondents said they had heard of the treaties, and of that group 85 per cent said the treaties had a "great deal" or "fair amount of impact".

But in Lebanon, while 69 per cent said they were aware of the conventions, only 36 per cent of them thought they were effective in limiting suffering.

"When you look more critically at the study you see that the Geneva Conventions are important and these rules should be respected, but it points to the fact that [the conventions] should be better enforced," said the ICRC's director for international law, Philip Spoerri.

"Much more has to be done to make them known and work."

The International Committee of the Red Cross

The ICRC is a private agency governed by a committee of between 15 and 25 exclusively Swiss members.

The ICRC employs about 11,800 people including 9,500 national staff and more than 1,300 expatriate delegates.

Until the 1990s, only Swiss citizens were allowed to serve as ICRC delegates abroad.

Some 90 per cent of the ICRC's funding comes from governments but the organization is independent of any government.

The ICRC says it works in 80 countries and assists roughly 15 million people each year.

The ICRC is the custodian of the Geneva Conventions. The ICRC's humanitarian mandate, which includes visiting prisoners, organizing relief operations, reuniting separated families and other humanitarian activities during armed conflicts – is spelled out in these conventions. 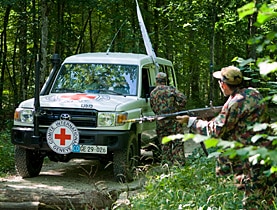 On mission with the ICRC in Geneva

How do you train someone to negotiate a military checkpoint, assist thousands of conflict victims, teach the rules of war to rebels and handle the ... 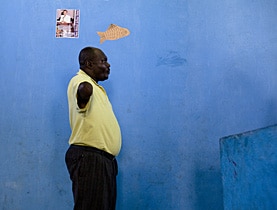 Civilians are bearing the burden of military conflicts and the consequences are devastating, says the International Committee of the Red Cross (ICRC). 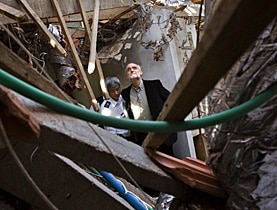 Much remains to be done worldwide despite progress on Guantanamo and cluster bombs, the head of the International Committee of the Red Cross ...

Lending a helping hand around the world The Swiss-run International Committee of the Red Cross is a neutral and independent organization whose ... 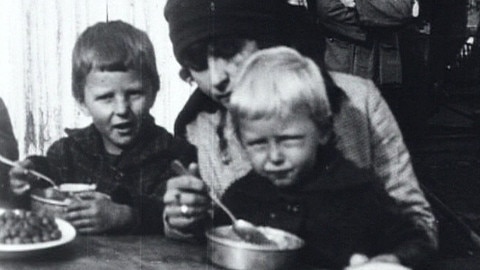 Humanitarian action and cinema. The International Committee of the Red Cross and Memoriav, the organisation for the preservation of Switzerland's ...