As many as 12,000 people have been killed by a massive earthquake in southwestern China, officials said on Tuesday, a number that is expected to increase.

Beijing has yet to call for international assistance, but the Swiss government and non-governmental organisations say they are ready to contribute to disaster relief efforts.

Numerous schools, factories and dormitories collapsed after the 7.9-magnitude quake on Monday.

Dozens of aftershocks were reported to have followed the quake, the country's official Xinhua news agency said.

The earthquake is China's worst in over 30 years. Relief workers are said to be continuing to dig out bodies from under collapsed buildings in the worst hit areas in the Sichuan Basin region.

Among the victims are 900 students buried alive near the quake's epicentre, 1,500 kilometres southwest of the capital Beijing.

State-run media have also reported between 3,000 and 5,000 deaths in Beichaun County, 92 kilometres from the regional capital city, Chengdu. Tremors were reported as far away as neighbouring Thailand and Vietnam.

There have been no reported Swiss casualties, according to foreign ministry spokesman Lars Knuchel.

A Swiss foreign ministry official said on Monday the government had been in touch with the Chinese authorities.

"We are in contact with the Chinese government via the embassy, via our representations, and naturally also through the UN," Toni Frisch, the head of the Humanitarian Aid Unit of the Swiss Agency for Development and Cooperation, told Swiss radio.

Chinese authorities have already approved a mission by the Geneva-based International Federation of Red Cross and Red Crescent Societies.

"There will be an international Red Cross team that will travel to Chengdu and we've been asked if we in Switzerland can send an expert," said Martin Fuhrer of the Swiss Red Cross.

The Chinese government has responded to the latest disaster with a barrage of troop mobilisations and uncharacteristic transparency.

Observers say the country's approach to the latest disaster has been markedly different from the response in Myanmar, which was hit by a cyclone ten days ago.

The Chinese premier, Wen Jiabao, travelled within hours of the quake to the most affected areas to direct rescue operations and comfort survivors, and the government has over two million soldiers at its disposal.

In 1976, an earthquake killed over 240,000 people in the city of Tangshan, near the capital Beijing.

The earthquake struck 29km below the earth's surface, with the epicentre located 92 kilometres from Chengdu, the provincial capital.

At 2.35pm, an aftershock measuring 3.9 on the Richter scale hit Tongzhou District in eastern Beijing.

Tremors were reported throughout China and as far away as Bangkok, the capital of Thailand, and in Vietnam. 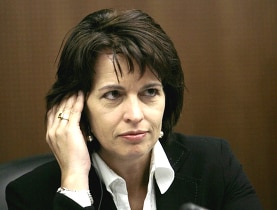 Free trade, human rights and the environment have dominated a three-day visit to China by Economics Minister Doris Leuthard. The ministry said ...