More than 200 years after her execution, the story of the “last witch in Europe” still fascinates. To this day, the case of Anna Göldi causes discomfort.

He thinks long and hard before actually saying it. Walter Hauser knows that his words could sound sensational, or even cynical. After some hesitation, he finally utters: “It’s like a curse. I just can’t let go of this story.”

Talking about a curse when referring to Göldi is somehow ironic. She was the last woman to be executed for witchcraft in Europe. Even now, well over 200 years after an executioner from Glarus beheaded her on June 13, 1782, people from all over the world are still captivated by her story.

It was 12 years ago that Walter Hauser became captivated by Göldi, and he is unable to let go to this very day. He knows everything there is to know about her life. The journalist and lawyer has written two books about her; he is the president of the Anna Göldi Foundation and he worked tirelessly to have Europe’s “last witch” exonerated ten years ago. He is currently helping to put the finishing touches on the new Anna Göldi Museumexternal link, which is due to open its doors on August 20.

Having grown up in Glarus himself, Hauser stresses the need for such a museum. “Most tourists come to Glarus, the capital of the canton of the same name, because of Anna Göldi. Her story has everything a good drama needs: love, power, intrigue and death.”

Anna Göldi was born on October 14, 1734 and grew up in the district of Sax, which used to belong to Zurich at that time. Her family was poor and were right at the bottom of the social hierarchy.

At the young age of 15, she had to earn money as a maid and worked in various households in her home village of Sennwald. When she was 31, she got pregnant with her first child. The father was a mercenary who left the country before the child was born.

The baby brought tragedy into Göldi’s life: it suffocated during its first night. Even though infant mortality was widespread at the time, she was accused of having killed her own child. For the first time in her life she experienced the cruelty of justice.

As a punishment, the maid was tied to the pillory and put under house arrest, which obliged her to live in her sister’s house for six years. She escaped to canton Glarus, a separate sovereign territory a day’s walk away, and found employment with the rich Zwicky family.

Göldi had a relationship with the land owner’s son, Melchior Zwicky, a young doctor who was 11 years her junior. She gave birth to a healthy boy. Due to their social differences, it was impossible for them to get married, no matter how hard Melchior Zwicky fought for it. It is not known what happened to their son.

“Anna Göldi was a very stubborn woman for her time,” says Masha Karell. The actress plays the lead role in the Anna Göldi musical, which has its premiere in September. She has spent a long time preparing for this part. “I went to the various locations of Anna Göldi’s life and absorbed everything I could possibly find out about her personality.”

Some of the places still look the same. The Zwicky house is still where it used to be. The more Karell found out about Göldi, the more impressed she became. “This woman went through a lot and it is hard to imagine how she did it.”

She was sentenced for child murder, pilloried and driven into exile. She was unhappily in love and was not allowed to keep her illegitimate son. “But Anna Göldi got back on her feet again and again, and she carried on,” says Karrell. The actress knows that she needs to play a very strong character. “She was like a wild horse that was impossible to catch.”

It was her last employment that led to Göldi’s confinement and finally her beheading. In 1780, the then 46-year-old woman took up a position as a maid with the Tschudi family. The judge and physician Johann Jakob Tschudi was the head of the family and belonged to the Glarus elite.

One morning, one of the Tschudi daughters found needles in her milk. The landlord immediately suspected where these needles came from. He accused the maid as she had prepared the drink. Göldi lost her job and the Glarus high society encouraged her to leave the area.

Eighteen days later, another Tschudi daughter vomited pins and other metallic objects. Despite having left the house two weeks previously, Göldi was the main suspect. Tschudi immediately expressed his conviction that the maid had ‘corrupted’ his daughter – in other words, put a curse on her.

Even though there was no rational basis for this suspicion, Göldi was arrested and tried. The witness stand was almost exclusively occupied by friends of the Tschudi family. At first, Göldi denied the charges, but after repeated torture she admitted to having ‘corrupted’ the girl with the Devil’s help. This testimony finally led to her decapitation in 1782.

It was an extraordinary verdict for the Europe of that time. Enlightenment had already reached rural communities and people had renounced superstition, especially among the educated upper class. Being a physician, Jakob Tschudi was part of that elite.

According to Walter Hauser, Göldi’s conviction as a witch was only possible because a powerful man brought the charges. “If someone else had made the same accusations, nothing would have happened. It was a miscarriage of justice.” According to Hauser, Jakob Tschudi simply wanted to get rid of her.

One possible reason for the sentence was that Tschudi had probably had an affair with Göldi. “If this had been discovered, it would have put an end to Tschudi’s social and professional life,” Hauser says. “After the trial, Tschudi wanted an official document confirming that he never touched Göldi.”

Maybe Tschudi did not like Göldi’s independent mind. Maybe he was scared that she would incriminate him and, in case of a dispute, would have found enough people to support her. She is described as a proud, attractive and a “pretty educated” woman. Actress Masha Karell sees it clearly: “Anna Göldi was too independent, which was a bit too uncomfortable for some of her contemporaries.”

Her story remains uncomfortable to this very day. Anna Göldi is a perennial problem in Glarus, even ten years after the canton officially rehabilitated her. But maybe this is exactly Göldi’s curse. She reminds us that even Swiss history has its dark moments.

On 20 August, the new Anna Göldi museum opens in Glarus. It is housed in the historic “Hänggiturm” building that was used by the textile industry. The museum is open between April and October, from Wednesday to Sunday afternoons.

On September 7, the Anna Göldi musical has its premiere on the SIG grounds in Neuhausen. Apart from Masha Karell, Marc Dietrich plays together with the band 'Peter, Sue & Marc'. The last performance takes place on October 22.

The central canton of Glarus has officially exonerated Anna Göldi, more than two centuries after she was beheaded for poisoning a child. Regarded ...

The Swiss town that ordered Europe’s last execution for witchcraft has unveiled a memorial for the woman beheaded more than 200 years ago, accused ...

Swiss witches are making a comeback from the dead as cantons rehabilitate some of those they executed in past centuries - with the last case as ... 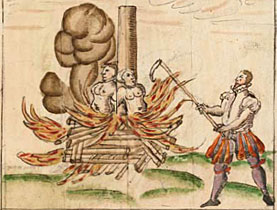 Between 1423 and 1666, the small town of Sursee in central Switzerland hosted 59 witchcraft trials. Most defendants were found guilty, beheaded or ...