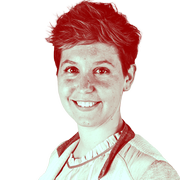 Leandra Bias is a political scientist who has just submitted her dissertation on feminist critique in authoritarian regimes at Oxford University. She works as a gender expert at the Swiss Peace Foundation (swisspeace).

Leandra Bias is a political scientist who has just submitted her dissertation on feminist critique in authoritarian regimes at Oxford University. She works as a gender expert at the Swiss Peace Foundation (swisspeace).

The first problem is the focus on declarations of war: by the French government against “Islamist separatism” and by Vienna against “political Islam”. While such statements convey an energetic and action-oriented approach, they are worded in disastrously vague terms.

This is a trend we have witnessed ever since US President George W. Bush announced the “war on terror”. Since then, the catchwords “terrorism” and “extremism” have become so widespread in our laws that they can mean almost anything: ideas, beliefs or speech.

The preventive mechanisms that ensue from this undermine the very values we should be protecting most preciously: freedom of speech and the rule of law. These achievements are under attack from Islamists, and yet we are busy digging a grave for them with our supposed prevention strategy.

This preventive action involves sacrificing the right to privacy in exchange for the promise of absolute security. It also leads to a situation where we no longer regard citizenship as a fundamental right but reinterpret it as a privilege that can become the plaything of our criminal justice system.

In Switzerland, we are about to adopt the toughest anti-terrorism law in the Western world. If campaigners fail to collect enough signatures to force a referendum on the proposed legislation, it will become possible to place people under house arrest without a court order, simply on the suspicion that they may commit a terrorist act in the future. The bill would also apply to minors and violates the European Convention on Human Rights. This is why it has also been sharply criticised by the UN human rights special rapporteur, Fionnuala Ní Aoláin. At the beginning of the year, Switzerland also legally revoked a person’s citizenship for the first time since the Second World War.

It is therefore hardly surprising that Austria is now also trying to strip citizenship from dual nationals who are active Islamists, and that Vienna and Paris are leading efforts within the EU to ban encryption in message services such as WhatsApp, in order to increase the possibilities for surveillance.

Combative speeches are seductive, as they suggest determination and quick, easy solutions. However, they overlook the fact that far-reaching powers already exist, certain problems are actually minimal, and the measures are highly counterproductive.

The case for supporting Macron's stance on "Islamist separatism"

This content was published on Nov 24, 2020 Nov 24, 2020 A global debate on Islamism has flared up, in which the French President called the problem by its name, writes political scientist Elham Manea.

Take French President Emmanuel Macron’s approach to combating an Islamist “society within the society”, for example. He announced in his speech that, from now on, homeschooling would be strictly limited, to prevent girls from being kept out of school. Then, in a letter to the Financial Times, he stated that girls in “some districts are raised wearing a full veil, separated from boys and in hatred of France”. The article was subsequently withdrawn, as it contained factual errors. According to the latest statistics from the French education ministry itself, girls attend school no less than boys.

Once more, the Muslim population of France is being defamed and marginalised. Muslims are called into the arena on a selective basis to condemn terrorist attacks, completely disregarding the fact that the majority of victims of Islamist attacks worldwide are actually Muslim. Let’s remember: Isis established the caliphate on the territory of Iraq and Syria, and not in the French region of Alsace, for instance. Yet, if the Muslim population wanted to initiate a discussion on systematic social and economic discrimination, they would be silenced again.

We know that anti-Muslim discrimination fosters radicalisation. We can assume the same is true in Switzerland. No studies have been carried out so far, which itself is indicative of a lack of interest. Clearly, our preventive strategy is not concerned with understanding the real motives. Islamophobia is certainly growing in Switzerland. We have thus not just banned minarets, but are increasingly adopting the French discourse, and will vote on a burqa ban next spring.

Bachelet should fix disastrous China visit by standing with victims

Another problem is when anti-Muslim discrimination takes place in the name of women’s rights. Feminists are described as “surprisingly quiet these days” and accommodating to Islamism.

The fact is that feminists have criticised Islamism for years as part of a global patriarchy. But they are not willing to align themselves with xenophobic currents. So the focus is never only on Islamism, but just as much on right-wing extremism and other misogynist movements that exist under the guise of “conservatism”.

And what if we turn the question around: why does everyone remain so quiet when, in the name of Christianity, a European country [Poland] completely restricts the right to abortion, thereby attacking the fundamental right of women to self-determination over their bodies? What if this had triggered the same uproar, and given rise to the same solidarity with Polish women? This would have meant consistently defending women’s rights, and not just when they are useful in order to defame other groups.

A coherent approach to human rights is tragically lacking in the current anti-terror debate and policies. But achieving it is difficult, as it does not offer any quick, simple or heroic solutions. Instead, it requires a long, self-critical and expensive process. This is the only course of action that would truly protect us in the long term.

swissinfo.ch publishes op-ed articles by contributors writing on a wide range of topics – Swiss issues or those that impact Switzerland. The selection of articles presents a diversity of opinions designed to enrich the debate on the issues discussed. If you would like to submit an idea for an opinion piece, please e-mail english@swissinfo.ch.