The central Swiss canton of Glarus has narrowly voted to let young people from the age of 16 have their say in cantonal and communal affairs, a first in Switzerland.

Voters at the canton's annual Landsgemeinde or open-air assembly on Sunday backed a proposal by young Socialists on the issue, which is also being discussed elsewhere in the country.

It took three rounds of voting by the traditional show of hands before the head of the local government, Röbi Marti, was able to announce the result.

He even had to ask government colleagues to come to the podium so that they could help him with the count.

"If the open-air assembly can show a sign to other cantons, so much the better," he said in his opening speech.

The head of the cantonal interior department, Marianne Dürst, argued a "yes" vote would be a sign of confidence in young people.

Twelve people had their say on the proposal to lower the age from 18 in an assembly that was marred by pouring rain.

"Let's show the way. Sooner or later, other cantons will follow [our example]. We have the chance to be the first," said one young Socialist.

"Let's be courageous and Switzerland will not look at us as it did before," commented a member of the local parliament.

Opponents also had their say, with arguments ranging from increasing violence and alcoholism among young people to a lack of interest in politics.

The Landsgemeinde is one of the oldest and simplest forms of direct democracy in Switzerland. All registered electors are invited once a year to ...

One speaker even suggested raising the age of the right to vote to 19, which brought only laughter among the crowd.

Young Socialists in the canton had also wanted to lower the age of eligibility to stand for elections but this faced opposition from the local parliament.

As a result they backed a counter-proposal from the local government, which was in favour only of the right to vote from 16.

This year's Swiss president, Foreign Minister Micheline Calmy-Rey, who attended the assembly as a guest of honour, said she had not been surprised by the vote.

She noted that Glarus had been the first canton to adopt a labour law and that in 2006 it had surprised many people by accepting plans to reduce the number of its communes through merger from 25 to three.

Glarus is the first Swiss canton to introduce the right to vote on cantonal and communal issues at 16.
In the European Union, the two German states of Lower Saxony and Schleswig-Holstein already grant the right to vote from 16.
The Austrian government wants to do the same at national level, with parliament due to have its say in the near future.

The young Swiss confederation of 1848 set the age to vote on federal matters at 20.

The Swiss electorate voted to lower this to 18 in 1991, after such a proposal had been turned down in 1979.

The first canton to grant the right to vote at 18 was Schwyz in 1898. Other cantons did not follow the lead until 1977.

Young left-wing political activists have been calling for the right to vote from 16 for some time.

Canton Bern may be the next to follow the example of Glarus. Last week, the cantonal government supported a proposal from the centre-left Social Democrats and young Socialists to lower the age to 16. The cantonal parliament makes a decision in June but local voters will have the final say. 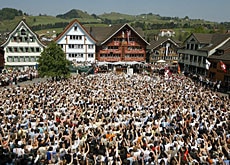 Their reputation for being conservative and independent precedes the people from Appenzell, a rural region that maintains the ancient tradition of ... 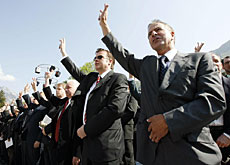 Ancient institution looks to the future

The "Landsgemeinde", a traditional open-air assembly where citizens vote by a show of hands, has a future if it can adapt, a senior Glarus ...