Some residents of Glarus are trying to end a ban on dance and entertainment events on religious holidays that still exists in nine Swiss cantons.

“This year, the cantonal police wrote to the owners of cultural and entertainment places reminding them that the ban also applies to the evenings before the main religious festivals,” Martin Jenny, coordinator of the committee to end the dance ban, told the Swiss news agency Keystone-SDA.

Dance, musical and even sporting events are forbidden on religious holidays like Christmas, Good Friday and Easter Sunday. Nightclubs are to remain closed, but house parties are allowed, provided they are not too noisy.

The Glarus committee submitted an initiative this year to the cantonal parliament for submission to the “Landsgemeinde”, or people’s assembly which takes place once a year. Glarus is one of only two remaining Swiss cantons – along with Appenzell Inner Rhodes – that still holds a “Landsgemeinde”, a 600-year-old tradition.

The initiative says the dance ban is outdated and that “each person should be able to decide if they want to go to church or to a party” on religious holidays. The parliament is expected to discuss the initiative in January and it could be submitted to the “Landsgemeinde” in May 2019.

A so-called dance ban still exists in eight other cantons, all German-speaking: Aargau, Graubünden, Obwalden, Schaffhausen, Uri, Thurgau, Appenzell Inner Rhodes and St. Gallen (only if there are more than 500 people). After the Reformation, dancing was allowed as a custom in Catholic regions, but the Protestant church was against it.

Walking through the Swiss city of Biel on a sunny afternoon, everything is as normal. A crowd has gathered around a street performer - except - ... 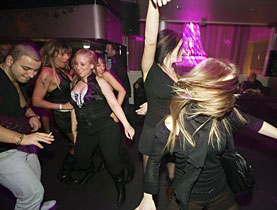 Take off your dancing shoes for Easter

Residents in seven Swiss cantons will be required to turn off their music and put away their dancing shoes to respect a ban on dancing on Good ...