An exhibition of René Burri's more explorative work showcases the Swiss photojournalist’s obsession with pushing the boundaries of photography.

Since 2013, the Musée de l'Elysée’s René Burri's private archive has housed 30,000 images. The exhibition René Burri, Explosions of Sightexternal link can be viewed in Lausanne until May 3.

Burri, best known for his iconic portrait of Che Guevara smoking a cigar, died in 2014 at the age of 81 after a long career. He travelled widely for his reporting and remained a traveller for the rest of his life. However, Burri never forgot where he came from, and the special nature of a life between two countries - Switzerland and his second home France - always played a role in his work.

The title of the exhibition "Explosions of Sight" suggests something big, uncontrolled and wild. It reflects Burri's desire to break out of the technical limitations that are naturally inherent in photography.

René Burri attended the photography class led by Hans Finsler at the Zurich University of the Artsexternal link. This was an environment in which photography began to embed itself in the world of art. Here, the new possibilities of the medium were still directly opposed to the traditional forms of the fine arts. Drawing and sketching were taught as a school of seeing that complemented photography.

Burri was also inspired by his acquaintances. Another well-known Swiss photojournalist, Werner Bischof, always carried a sketch pad as part of his equipment.

In 1993 Bischof travelled to Cuba for the cultural magazine DU. The editor in charge, Marco Meier, met him there and described how he himself was picked up at the airport in Havana by Burri:

"I felt as if I was coming home. Fatherly Burri had already made a lot of preparations. His room in the Hotel Inglaterra was prepared as if it were his living room - books everywhere, photos of his second wife, cigars, notebooks, sketchbooks for his collages, watercolours, brushes and, inevitably, the limes and rum for a first mojito.”

World-renowned Swiss photographer René Burri, known among others for his portraits of revolutionary hero Che Guevara and artist Pablo Picasso, ...

Parting shots Through the lens of René Burri

Swiss photographer René Burri was known for his portraits of prominent people and places.

In a world flooded with images, Swiss photographer Michael von Graffenried still believes the work of professionals is indispensable. 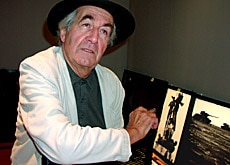 The man who made an icon of Che

Swiss photographer René Burri has travelled the world, witnessing history and meeting many of those who made it, from Picasso to Che Guevara. ...