As Switzerland’s glaciers melt, the nation is looking for sustainable ways to manage its water supply. Researchers point out the potential problems of changes like newly-formed lakes, but also say they could provide interesting opportunities.

Today’s glaciers are a shadow of their former selves. Many will disappear entirely as a result of global warming, but what will happen to the water stored within their ice? Local scientists predict that in the coming decades, more than 50km2 of lakes will form in the place of Switzerland’s glaciers.

“The change in the high mountains will be really dramatic, and it’ll happen very rapidly. Then it will last for many generations because the glaciers probably won’t come back,” Wilfried Haeberli told swissinfo.ch.

Haeberli, a world-renowned glacier expert, and his team recently finished a project under a national research programme on sustainable water management. Called “Lakes as a consequence of melting glaciers: opportunities and risks”external link, the project used glacier bed models to calculate where and when new lakes were likely to form in Switzerland.

But the presence of the glacial lakes won’t just mean a change in the landscape, which he describes as “central for the identity of Switzerland – both in a patrimonial sense and as a tourist attraction”. The professor emeritus at the University of Zurich says that the seasonal redistribution of the water supply will be a serious issue.

“The Swiss population has lived for centuries with the security of having enough water in the summer because of snow and ice, and this will go away. In normal years, Switzerland will still have enough water, but in extraordinary [dry] years like 2003, there might be problems,” he said.

From 2010- 2014, the National Research Programme called “Sustainable Water Management” (NRP 61)external link developed scientific foundations and methods for managing water resources, which are under increasing pressure. They looked into the effects of climate and social changes on the water supply and identified the risks and future conflicts associated with its use.

A more likely scenario than too little water is the risk of flooding and landslides, particularly for communities directly below the new lakes.

“Especially the larger ones, like in the Aletsch region – this is a completely new situation. The people in Brig [the town below the Aletsch glacier] have never had a big lake above their heads, but they will have a number of them,” warns Haeberli, citing the need for the authorities to start thinking ahead. For example, they should look into building retention structures.

Already, Grindelwald in the Bernese Oberland has had to deal with the threat posed by an existing glacial lake. The authorities had a drainage tunnel built to keep the lake at a safe level.

“An excellent measure,” Haeberli said. “But they were a little bit late and they had a year when the situation was quite dangerous.”

Tourists are a key factor in this potentially wet equation. Currently, the glaciers are an attraction. When they’re gone, the landscape might look bare, yet new lakes could be a draw in their own right. But the threat of sudden flooding or other natural disasters would be poison to tourism.

Another factor is the power companies. Uncertain as to the extent that they could benefit, they’re keeping a close eye on the landscape-changing developments in the Alps. In theory, they could harness the new lake water to create energy.

“We'll lose the natural [water] storage in the form of glaciers, so we'll need artificial storage – which might be the hydropower lakes,” Roger Pfammatter, director of the Swiss Water Associationexternal link, told swissinfo.ch.

While he acknowledges that this could be a great opportunity for hydroelectricity companies, Haeberli has some reservations.

“Many of the lakes will form on protected landscapes such as in the Aletsch region,” he says. In Switzerland, federal law protects numerous Landscapes and Natural Monuments of National Importanceexternal link – making it difficult, if not impossible, to build anything in these zones.

In places where construction would be allowed, Haeberli believes that there could be synergies between hydro-power and tourism. One current example is the suspension bridge at the Trift glacier – also the site of a hydroelectric plant. The bridge was built after the rapidly receding ice sheet became a lake. Both the bridge and what remains of the glacier are tourist attractions, sharing some of the same infrastructure, like access by cable car. Grimselwelt’s visitor informationexternal link even promotes a tour where people can abseil down the dam wall.

The “big challenge is to find acceptable solutions for everybody,” finds Pfammatter, whose association specialises in hydropower, flood protection and hydraulic engineering. Haeberli praised the good communication his group has had with the water association, but is critical of how the energy business works. In his opinion, everything seems driven by prices and the long-term view is missing.

“What are we doing with this new landscape? Our generation is taking decisions for many generations to come,” Haeberli says.

Pfammatter agrees that there should be more long-term planning.

“There should be people taking the risk to take these decisions. But hydropower plants are in the hands of the public. Some 85% of Swiss hydropower belongs to cantons and communes. The problem right now is that political and economic uncertainties are of much more concern to the hydropower companies than climate change,” Pfammatter said.

Rather than offering specific solutions, Haeberli’s study focusses on predicting where the lakes might form and how they might affect the surrounding communities.

Now it’s time for decision-makers to plan for the future, urges the report. “In order to acknowledge potential benefits and hazards, and mitigate legal conflicts, plans and consultation must, where possible, be conducted at an early stage and cover all eventualities.”

Switzerland’s glaciers are about a third smaller than they were in 1973. Now they cover an area of roughly 940 km2, according to a report by the University of Fribourg. Using high resolution aerial images, the Fribourg glaciologists made their calculations by comparing outlines and terrain models from 1973, 1980 and 2010. Most of Switzerland’s glaciers are in the Bernese and Valais Alps.

Switzerland’s water sector is not properly equipped to deal with climate change, warns a government-backed study by the Swiss National Science ...

Chasing water How a glacier melts

Scientists have dyed the melt water from the Plaine-Morte glacier to improve understanding of future water management under climate change. 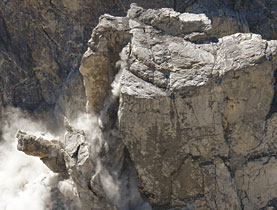 The Swiss resort of Grindelwald is facing a serious threat of flooding as a result of glacier movement on the Eiger high above it. 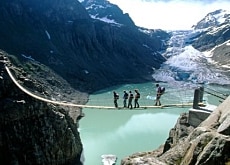 People are flocking to see global warming at work in the Swiss Alps. A rapidly melting glacier has become a must-see.

By Dale Bechtel at the Trift Glacier