Switzerland’s communists are celebrating the 60th anniversary of the founding of their Labour Party.

The small far-left party has lost much of its appeal over the decades, but claims it is recruiting new members among anti-globalisation groups and younger women.

Despite the failure of the Communist movement in the second half of the 20th century, the party is still advocating radical change to the political system in Switzerland.

“We refuse to take part in the Swiss system of consensus and compromise. Our aim is to change the political system,” said Josef Zisyadis, one of two Communist members in the federal parliament.

In a booklet to mark the anniversary of the party, the former revolutionaries admit to certain misjudgements and errors in the 1950s and 1960s.

They say tensions about the policy of the Soviet Union in central and Eastern Europe led to strong divisions within the Swiss party.

But Alain Bringolf, its current president, claims that the Communist Labour Party was instrumental in helping to push through social welfare measures, including the state old-age pension system and universal suffrage.

“Our demands have at least partially been met,” he said.

The party, a merger of several regional far-left groups, was established in 1944 at a congress in Basel – four years after the government had outlawed the old Communist Party.

In its heyday in the 1950s, the party had about 20,000 members and was seen as a driving force for an egalitarian and fair society.

But over the decades its numbers shrank to just over 1,000, and today it is just a splinter group.

“The party traditionally has its roots in the workers’ movement, which is particularly strong in French-speaking Switzerland,” said Zisyadis.

“Nowadays new members often come from anti-globalisation groups,” he added. “The average age is around 45 and about half of the party members are women.”

The party says it has not lost its raison d’être, adding that it continues to fight for its causes together with other like-minded political groups, especially among environmentalists.

Kurt Imhof, professor of sociology at Zurich University, sees the Communist Labour Party as a movement that has helped to preserve certain ideologies through time.

“The party is like a time-machine which can feed its ideas into society especially during times of economic crisis,” Imhof told swissinfo.

He added that the party initially made a strong impression at federal, regional and local levels in Switzerland before it turned into a Stalinist group during the Cold War era.

But Imhof believes the far-left could again become a political force to be reckoned with, if the centre-left Social Democrats move even further towards the political centre.

For his part, Fausto Beretta-Piccoli, a Communist member of the regional parliament in the Italian-speaking canton of Ticino, regrets that the party is always seen in the context of the Soviet Union or the rule of Pol Pot in Cambodia.

“Our image is forever tarnished,” he said.

Swiss communists founded the Labour Party in 1944 after the government had banned Socialist and Communist groups.
In its heyday in the 1950s, the party had around 20,000 members; today it is most prominent in the French-speaking part of the country and has just over 1,000 members.
It is represented by two members in the federal parliament. It also holds several seats in local councils in the French- and Italian-speaking parts of Switzerland.

The Communist Labour Party is celebrating its 60th anniversary at a meeting this weekend in the capital, Bern.

The event includes panel discussions and an exhibition of historical posters. 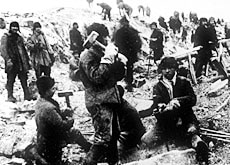 Around 200 Swiss emigrated to the Soviet Union during the 1920s and 1930s, inspired by the Russian Revolution to create the ideal Communist state. 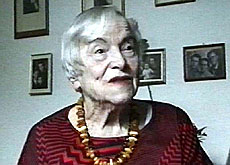 An exhibition in Geneva devoted to Soviet forced labour camps is bringing home the horrors of Stalin’s Gulag. For one Swiss woman who spent five ...