Rosa Rein, the oldest Swiss citizen, has celebrated her 112th birthday, consolidating several records including being the oldest Jew in the world.

But despite exceeding the average life expectancy for a Swiss woman by almost 30 years, Rein doesn't even make the top 20 of oldest living "supercentenarians".

Born on March 24, 1897, Rein has been the oldest living person in Switzerland since September 2006, following the death of 110-year-old Anna Ringier-Kieser. Since June 2008 she has held the record for being the oldest Swiss ever.

In previous years, Rein's birthday had always attracted the big political figures from Italian-speaking Switzerland but this year she decided things would be different, according to her nursing home on the shores of Lake Lugano.

Sipping a glass of champagne and nibbling a piece of birthday cake, Rein was surrounded on Tuesday by friends and family and members of the local Jewish community.

She recently said that apart from failing eyesight and hearing she was in good health – "doctors won't get rich from me!"

Rein was born in Upper Silesia in Dzietzkowitz/Dziećkowice – today Poland but at the time part of the German Empire – making her the oldest living person born in Germany.

She grew up with her five brothers and sisters in a well-off family on a farming estate which employed 24 staff.

She went to school in the neighbouring town of Mysłowice, where she did well enough to get to college – far from a common occurrence at the time.

After that she ran a textile business with her first husband, whom she married in 1935 at the age of 38. But after Kristallnacht, the anti-Jewish pogrom in Nazi Germany in November 1938, the couple fled to Brazil.

Her mother died in a German concentration camp, "during the dark period of world history", she said.

Rein doesn't like talking about the Holocaust, but a photo of her parents hangs above her bed.

She also experienced loss in Brazil, with the premature death of her husband. She married again in 1949, and when her second husband became ill, they decided to move "to a healthy climate".

In 1964, after a brief stay in Genoa, Italy, the couple arrived in Paradiso, a community set in the idyllic lakeside surroundings of Lugano, canton Ticino, in southeastern Switzerland.

In 1973 Rein's second husband died. She had no children and her relatives all live abroad – in Britain, Israel and the United States, although some travelled to Lugano for Tuesday's celebrations.

Rein lived on her own until 2001, when, after a fall, she decided to move to a nursing home.

The average life expectancy for a Swiss woman is 84.2 years and for a man 79.4 years, according to 2007 figures from the Federal Statistics Office.

But while Rein has exceeded that by a generation, she is only 26th on the list of the world's 88 living supercentenarians, people over 110, verified by the Gerontology Research Group. Just seven are men.

By their nature such lists can quickly change, but Rein is definitely the oldest Swiss citizen and, following the death of Berta Rosenberg in January 2009, appears to be the world's oldest Jew.

She is the sixth-oldest European, beaten by one Frenchwoman and four Italian ladies – a good advertisement for the Mediterranean diet.

The oldest living human is the American Gertrude Baines, the daughter of a slave, who will be 115 on April 6.

However even Baines has some way to go before entering the Guinness Book of Records as the person with the longest confirmed lifespan in history. On August 4, 1997, Jeanne Calment died in France aged 122 years and 164 days.

Life expectancy at birth in Switzerland is currently one of the highest in the world, resulting from a significant rise during the 20th century.

Women live longer than men, and the gap in life expectancy of the two genders has widened during the past century. Consequently, demographic ageing causes an increase in the proportion of women in the population of Swiss nationality. From 51.3% at the beginning of the 20th century, it increased to 52% in 2005. 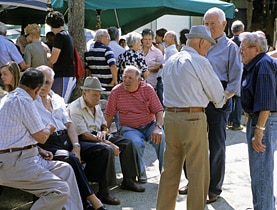 Researchers in Lausanne have studied how Switzerland's neighbours have reformed their retirement systems in order to find solutions for home. The ... 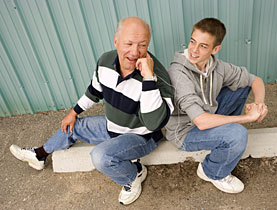 Old people "are not just a burden"

Pensioners, usually blamed for straining national resources, are in fact a source of income for care workers and save billions by looking after ... 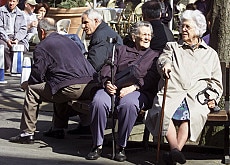 Report calls for more respect for the aged

The contribution that old people in Switzerland make to society deserves more recognition, according to a strategy document approved by the Swiss ... 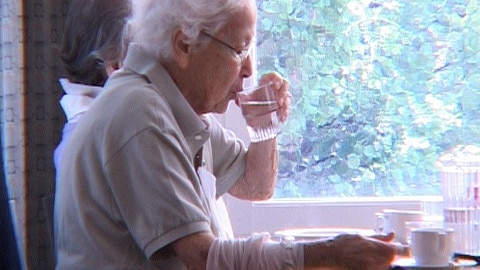 A home for old people

The Wildermett Park old people's home in Bern follows the so-called Eden-philosophy, which comes from the United States. It aims to make the ...