In 1947, as Europe lay in ruins, like-minded humanist photographers founded the agency “Magnum Photos” in Paris. It remains the oldest and most renowned photo agency in the world. Many of its images are iconic. To what extent was – or is – Switzerland a theme for the agency’s photographers?

If you enter “Switzerland” into the Magnum archivesexternal link, you’ll get around 9,000 results. Photographer Martin Parr focused extensively on Swiss cultural peculiarities, the World Economic Forum in Davos is always a topic, Henri Cartier-Bresson traversed the country, and the post-war images of legendary photographers René Burri and Erwin Bischof heavily influenced how the world saw Switzerland.

In 1947, during the heyday of photo journalism, Robert Capa, George Rodger, David “Chim” Seymour and Henri Cartier-Bresson founded the Magnum Photo agency as a cooperative. Images could not be cropped, a credit was obligatory, and the negatives and rights belonged to the author.

Originally the photographers would travel the world, from crisis to crisis, capturing life for magazines such as “Look”, “Life” or “Vu”. In the meantime, the choice of subjects expanded. Whoever wanted to join – and there were hundreds of applications a year – had to be voted in through a long process.

World-renowned Swiss photographer René Burri, known among others for his portraits of revolutionary hero Che Guevara and artist Pablo Picasso, ... 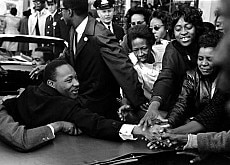 Looking back with a photographer's world view

Friends and artists Giacometti, by his friend Cartier-Bresson

French photographer Henri Cartier-Bresson called Swiss artist Alberto Giacometti his friend. It was a friendship that began in a Parisian café in ...

During the 40 years of his career, Philippe Halsman used the element of surprise in his works, hence “Astonish me!”, the title of a show at ...