Swiss referee Urs Meier has been accused of “robbing” England of a quarter-final victory at the 2004 European football championships.

England lost out to tournament hosts Portugal in a penalty shoot-out after Meier denied a goal which would have put them ahead in the last minutes of the game.

The unfortunate Meier woke up on Friday morning to discover that he had become a strong contender for the title of most unpopular man in Britain.

In a succession of characteristic tirades, the British tabloids convicted him of everything from imbecility to corruption, not to mention violating Swiss neutrality.

An estimated 25 million England fans tuned in on Thursday night to watch their side crash out of Euro 2004.

For “The Sun” – Britain’s most popular tabloid newspaper – England was “robbed” by a “half-wit” referee who made a “heartbreaking decision” to disallow a headed goal by Sol Campbell in the 89th minute of the game.

The Sun seemed to have no trouble finding fans who shared its sentiments.

“The ref was bang out of order and he should be sacked. He was terrible,” one England fan told the paper.

“That referee is more bent than one of Uri Geller’s spoons,” said another.

Meier disallowed the goal on the grounds that Campbell’s England teammate, John Terry, had fouled the Portuguese goalkeeper.

The "Daily Mirror", another British tabloid, sought to outdo its red-top rival with the headline “Reffing hell!” above an interview with former England striker Ian Wright, who told the paper that Meier’s decision was “a joke”.

“He’s meant to be the best referee in the world and he gives a decision like that. He cost us the game.”

“I thought the Swiss were supposed to be neutral. The referee is a damned disgrace,” was the conclusion of one Mirror reader.

By Friday afternoon Meier's name had spread well beyond the pages of Britain's tabloids.

“Sol obviously scored. Well, it was obvious to everyone apart from the Swiss referee, who clearly needs his eyes tested."

Rutley added that Asda had already sent Meier a letter informing him of the offer.

“We’ve written to Meier telling him that if he would like to take us up on the offer we will throw glasses in as well.”

The morning after the night before was not all bad news for Meier.

Switzerland’s leading tabloid paper, the “Blick”, was charitable enough to describe his performance at Thursday’s quarter-final as “solid”.

“He had the game under control at all times,” commented the paper.

But the Blick’s sports reporter, Christoph Graf, was not entirely convinced that Meier made the right decision by denying the goal.

“It was a decision which could have gone either way,” Graf told swissinfo.

He added that the referee should have intervened against two Portuguese players during the penalty shoot-out.

The 45-year-old Meier has been a referee since 1977 and earlier this year was voted by a panel of experts as the third-best football official in the world.

But he has not escaped controversy. At the 2000 European championships he came in for criticism for awarding a penalty against England which led to their elimination from the tournament.

Last year he became the subject of a curse by Romanian witches after a match he was refereeing led their country to lose out on a place at Euro 2004. 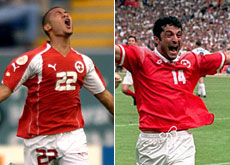 Swiss footballers fare no better than in 1996

The Swiss national football team are returning home from Portugal with mixed emotions from Euro 2004. The players led by manager Köbi Kuhn failed ... 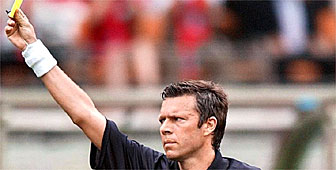 Swiss football referee Urs Meier will celebrate another career milestone on Tuesday when he takes charge of the World Cup semi-final match between ...

A football referee for over two decades, Nicole Petignat has been overseeing matches in Switzerland’s top division for four years. Her skills ...