It’s easy to do good during a period of economic growth but it is in times of crisis that companies reveal their true commitment to workers. 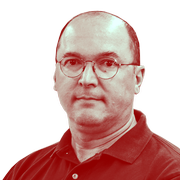 Valter Sanches is the general secretary of IndustriALL Global Union. IndustriALL is one of five global unions based in the Geneva area, and represents 50 million workers in the manufacturing, mining and energy sectors worldwide

The coronavirus pandemic took us all by surprise. For the world’s unions, the immediate priority was protecting the safety and livelihoods of working people. By negotiating pay during lockdownsExternal link in many countries, millions of workers were able to stay safely at home, slowing the spread of the virus and saving lives.

The global shutdown was unprecedented, and the world is forever changed. For some, it reinforced our sense of our common humanity, our responsibility towards one another. We have all been moved by examples of sacrifice and solidarity.

We have also realised that many of the essential jobs that hold our societies together are some of the worst paid and least respected. Many have learned the value of supermarket, transport and delivery workers, of health workers and hospital cleaners, who often had to go to work without protective equipment.

We are not all in this together. We all face the same storm, but some are on dry land, others on seaworthy boats, while still others cling desperately to rafts and debris. Income inequality has been growing for years, and the pandemic has sped up the process. Women and people of colour have been disproportionately affected.

Sign up! Keep tabs on Switzerland's biggest companies, directly in your inbox

The response to the pandemic is revealing

Some political leaders ignored and downplayed the crisis, or used it for political ends. Others burned political capital, making unpopular lockdown decisions to save lives. In IndiaExternal link, the Philippines, Turkey, Brazil, Indonesia and elsewhere, the pandemic was used as an opportunity to weaken labour protections and attack human rights.

It’s easy to do good during a period of economic growth but it is in times of crisis that companies reveal their true commitment to corporate social responsibility. Some multinationals used their power and influence to hold society together; others took advantage of the crisis. On one end of the spectrum are those companiesExternal link that took government bailout money, paid dividends to shareholders, and then used the pandemic as an excuse to force through changes they wouldn’t get away with in normal times, laying off workers, casualising jobs and increasing the pace of production.

At the other end are companies that took responsibility for their supply chain, and worked out deals with suppliers, unions and national governments to hold things together in the short term. They also worked towards a sustainable new normal in the medium and long term. For instance, Belgian chemical multinational Solvay paid no dividends, and management took pay cuts.

Switzerland is a sustainable soy pioneer, but not yet a game changer

This content was published on Jul 17, 2020 Jul 17, 2020 The Alpine nation is the birthplace of the sustainable soy industry, but its commodity firms have not yet jumped on board.

The need for social dialogue

Most companies fall somewhere between these poles. Our job, as global trade unionists, is to move them in the right direction, towards global social dialogue.

Workers in the textile and garment sector in countries like Bangladesh, Cambodia and Vietnam lost their livelihoodsExternal link as global fashion brands refused to pay for orders they had placed. Facing bankruptcy, many supplier factories laid off workers. Some brandsExternal link committed to addressing the issue. Despite this, in many cases, suppliers used the pandemic as an excuse to fire workers and break unions.

This has been a depressingly familiar dynamic, and in many sectors, companies made sure that workers were first in line to pay the costs of the crisis. A spate of industrial accidents in India showsExternal link that employers are often quick to sacrifice lives to maintain production, and many countries and sectors saw mass layoffs.

A lot of the worst abuses happened in private companies in developing countries that many customers have never heard of, but these companies exist in an ecosystem: they are part of global supply chains ultimately controlled by multinational corporations.

One company that changed its behaviour under pressure from ourselves and unions around the world is Inditex, the Spanish garment multinational that owns popular high street brands like Zara and Massimo Dutti. Responding to the jobs crisis in the countries that produce fashion, Inditex made a commitmentExternal link to not only honour orders made to supplier companies, but to guarantee an ongoing payment schedule and provide financing to keep companies afloat.

Inditex also committed to ensuring that as factories reopen, they do so safely. Crucially, the company’s compliance with these commitments will be monitored by a global union committee, representing the company’s workers from around the world, including at supplier factories.

This content was published on May 29, 2020 May 29, 2020 As calls mount for equitable access, Switzerland is caught between established practice and global solidarity in how to encourage medical innovation.

The fashion industry has unique characteristics – notably, consumer-facing brands that are sensitive to public opinion – but the model of giving stakeholders real power to determine the future of the industry is what we must work towards across the economy.

Mining has been not seen this level of collective responsibility. Mining companies generally extract much of their value from poor countries with weak labour laws and safety standards. Many prefer a hands-off approach, with local subsidiaries tasked with maintaining a steady flow of commodities while resolving all problems locally.

Early in the pandemic, hundreds of miners were infected with Covid-19 at the Antimina mine in PeruExternal link, a joint venture between BHP Billiton, Swiss-headquartered Glencore and others. We’ve tried to engage these mining giants in dialogue for years, and we’ve made some progress with Glencore. Although we don’t have a global agreement, an informal dispute resolution mechanism in place before Covid-19 has helped to address issues like that at Antimina, as well as in the Democratic Republic of the Congo, ZambiaExternal link and elsewhere.

We have been less fortunate with BHP Billiton, who refuse to work with unions on a global level, and have used coronavirus as an excuse to break collective agreementsExternal link.

The Alpine nation is the world's leading gold exporter and refiner.

Within this spectrum, other dynamics have emerged, such as companies treating blue- and white-collar workers differently, or looking after workers in their home countries while ignoring those elsewhere.

Volkswagen generally has good relations with unions, and despite some recent tensionsExternal link, negotiates at a global level. In Germany, the company ensured the safe reopening of auto plants after lockdown restrictions were eased. But in South Africa, after 120 workers contracted Covid-19 at the Uitenhage plantExternal link, the ministry of labour found that the company had violated regulations for the safe return to work. When workers exercised their legal right to refuse unsafe work, Volkswagen suspended the union shop stewards. The issue is now being resolved by the global works council, but it shows where the cracks lie in our interconnected global system.

Companies are required by the economic system to maximize value for shareholders, which conflicts with their commitments to corporate social responsibility. Even the better companies are bound by the same market forces, and must compete with less scrupulous rivals. This creates a moral hazard that can reward bad actors with a competitive advantage. Ultimately, this can only be resolved by binding global standards that ensure a baseline of decency for all.

Time for a Just Recovery

Our unions believe it is time to build a Just RecoveryExternal link that rewards those who made sacrifices by building the foundations of a better future now. We need a global 21st century industrial relations system that acknowledges our connections to each other.

This content was published on Jun 10, 2020 Jun 10, 2020 After years of talks, a vote on the responsible business initiative is now a sure thing. The campaign promises to be heated; the result is uncertain.

New laws are one part, which is why the Responsible Business InitiativeExternal link in Switzerland, and similar proposals in other countries that seek to ensure corporate respect for human rights, are important. We also need to enforce the rules already in place including the International Labour Organisation conventions, and binding global agreements between workers’ representatives and companies.

Let’s not waste this crisis. This is the time to build a fairer and more resilient worldExternal link.

Valter Sanches is the general secretary of IndustriALL Global Union. IndustriALL is one of five global unions based in the Geneva area, and represents 50 million workers in the manufacturing, mining and energy sectors worldwide. You can read more about IndustriALL’s coverage of Covid-19 on the world of work hereExternal link.