When the Swiss athletes march into the Olympic stadium in PyeongChang, South Korea, for the opening ceremony of the 2018 Winter Games, they will wave a rectangular flag – proportions of 2:3 – in keeping with the other nations.

This is one of the exceptions when the Swiss flag is not square. This was decreed by the Lausanne-based International Olympic Committeeexternal link (IOC), which manufactures all nations’ flags. “The IOC decided, beginning with the Athens Games in 2004, that all flags would have the same rectangular format,” writes a spokesperson.

PyeongChang 2018 Swiss go for gold in the cold

The Winter Olympic Games have opened in PyeongChang. South Korea. Swiss athletes were cheered on in freezing temperatures.

The goal was that “no flag should stand out because of its format; this would go against the Olympic spirit, which seeks equality and respect among all nations”.

Nevertheless, there is one exception: Nepal, whose flag’s double pennant shapeexternal link is unique to say the least.

When it comes to square national flags, Switzerland is joined only by the Vatican. The two states also share another link: the Swiss Guards, the armed unit engaged to protect the Pope.

And flag nerds might also include the Wiphala bannerexternal link of Bolivia, the banner of the indigenous people there, which has equal status with the Bolivian national flag.

The other place the rectangular Swiss flag flies is over the world’s oceans. Thirty-five Swiss-flagged seafaring merchant ships and some 2,000 maritime yachts all hoist the rectangular ensign, says Reto Dürler, head of the Swiss Maritime Navigation Officeexternal link.

This was first flown during the Second World War to conform to international standards. Now it is encoded in federal law (SR747.30). The law stipulates that “Swiss maritime ships/vessels/boats must only fly the Swiss Maritime Flag”, Dürler explains.

He adds that this is in contrast to all boats plying Switzerland’s inland waterways; they fly the traditional square flag. This includes the Swiss Army flotilla – the closest thing Switzerland has to a navy – which operates small patrol boats on the larger lakes.

The origins of the modern Swiss flagexternal link date to 1339 when Swiss soldiers at the Battle of Laupen in canton Bern sewed a white cross on their tunics to distinguish them from the enemy armies of Fribourg and Burgundy.

In 1848, the modern flag was constitutionally declared as that of the Swiss Confederation flag. The national flag’s equilateral white cross has arms that are one-sixth longer than they are wide.

Everything you need to know about Switzerland's iconic cross.

When a flag becomes iconic. The striking Swiss flag with its red background and white cross can be seen not just fluttering above buildings and ...

The final breakthrough of the Gotthard Base Tunnel on October 15 will be a day of rejoicing for Swiss transport policy and Transport Minister ... 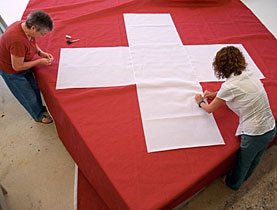 The last thing on the minds of Swiss mercenaries in days gone by as they fought for various European rulers was the colour of their flag, but ...