The Swiss army has admitted that there are still piles of explosives hidden around the country, mostly near borders, which were part of a Cold War strategy to blow up strategic roads, tunnels and bridges in the case of invasion. It aims to remove these by the end of the month.

Army spokesman Christoph Brunner told the Swiss News Agency on Monday that “all former explosive devices would be disarmed across the country by the end of November”.

He declined to say where exactly the remaining explosives could be found, but added that the ignition devices were stored at a safe distance.

Until now, hundreds of key roads and bridges across Switzerland have held stores of explosives for use in the event of invasion. The policy was developed during the Cold War, because of fears of an attack by Warsaw Pact countries, eight communist states of Central and Eastern Europe.

When a fire broke out in the Gotthard Tunnel in 2001, it was revealed that several tonnes of explosives were stored under the motorway lanes.

In addition, there are an estimated 8,210 tons of munitions lying at the bottom of some of Switzerland’s biggest lakes. 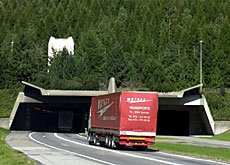 Relics of Switzerland’s Cold War defences are turning up in surprising places. Residents of a quiet area of Lucerne were shocked recently to find ...