Russia will participate in the next World Economic Forum (WEF), the organisers announced on Sunday. Moscow threatened in November to boycott the Davos meeting if its businessmen were excluded.

"We are delighted that Russia will also send a high-ranking government delegation to Davos," WEF executive director Alois Zwinggi said in a statement. "To meet global challenges, we need all stakeholders at the Forum's annual meeting."

If the Russian delegation were to include persons subject to sanctions, "all necessary measures have been taken to ensure that their presence would fully comply with the legal conditions in force", Zwinggi said.

Oligarchs in the crosshairs

Last month the Financial Times reported that three businessmen – aluminium magnate Oleg Deripaska, businessman Viktor Vekselberg and VTB Bank chief Andrei Kostin – had been informed that they would not be welcome at the elite gathering at the resort in eastern Switzerland, which next year takes place from January 22-25. All three have attended the Davos WEF meeting in the past.

+ Read more on why Russia threatened a no-show in Davos

What the three men have in common is that they have became the target of American sanctions this year and are considered close to Russian President Vladimir Putin. Moscow threatened to boycott the prestigious gathering if these Russian tycoons were excluded.

"If all these decisions that have been made in relation to Russian business representatives are not changed, then we will have to make a decision regarding the cancelation of participation in the Davos forum of state employees and Russian companies where the state has a stake," Prime Minister Dmitry Medvedev said on November 13.

Quoting Russian state news agencies, the NZZ am Sonntag and the Financial Times reported on Sunday that the WEF had caved in to Russian threats and renounced considering the three Russian oligarchs as persona non grata.

Moscow will not send a delegation to the World Economic Forum (WEF) annual meeting in the Swiss resort of Davos if prominent Russian businessmen ...

These are nervous times for the world’s leaders gathering in Davos for the World Economic Forum’s annual meeting.

A major update to the WEF's annual Global Competitiveness Index reveals the global economy is ill-prepared for rapid technological change.

On the edge WEF spawns a growing collection of fringe events

A growing number of alternative WEF fringe events are making their mark outside of the congress centre in Davos.

Russian ambassador Switzerland has ‘no evidence’ of Russian espionage

Russian Ambassador to Switzerland Sergei Garmonin has denounced Swiss accusations of Russian espionage in an interview on Swiss public radio. 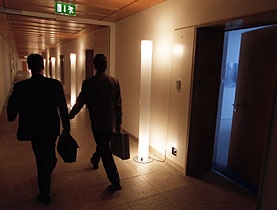 Spies target banks for the secrets they hold

Espionage One in four Russian diplomats in Switzerland is a spy, report claims

A report compiled for the Swiss government says that one out of every four Russian diplomats based in Switzerland is a spy, Swiss papers claim.