A national conference on cocaine has discussed whether the drug should be prescribed to long-term addicts.

Switzerland has had a programme of heroin prescription for the most hardened addicts for ten years and some doctors believe cocaine addicts could benefit from a similar treatment.

But others have their doubts. Officials from the Federal Health Office are especially concerned about the political impact of introducing cocaine prescription.

There are an estimated 90,000 cocaine users in Switzerland. However, most of them use the drug only on a recreational basis and would not be included in any prescription programme.

The conference, which ended in Bern on Friday, brought together Switzerland’s leading addiction specialists, as well as officials from the Health Office.

Daniel Meili, who heads Zurich’s heroin programme, says a typical candidate for cocaine prescription would be an addict with multiple dependencies.

“Of the 150 heroin patients I have here, perhaps a third of them could also benefit from cocaine prescription,” Meili told swissinfo. “They come here to get the heroin, but they are also addicted to cocaine, which they buy on the illegal market.”

Supporters of the programme point to evidence that patients on the heroine scheme have improved health and more stable lifestyles, including proper accommodation and even regular work.

But Meili says that patients who continue to be addicted to cocaine don’t reap any of these benefits.

“The mortality risk among these patients is quite high,” he said. “Without treatment, many of them will die in the next ten years.”

But Switzerland’s Federal Health Office is not convinced that introducing cocaine prescription is the answer.

“There’s just no evidence that such a scheme would be successful,” said Markus Jann, head of the drug addiction department.

“We would be very hesitant about trying such a thing, and anyhow we have more important addictions to tackle, such as alcohol or tobacco.”

The Swiss government also feels that this is not the ideal time politically to start talking about something as controversial as cocaine prescription.

Later this month parliament is due to vote on a much-delayed revision of Switzerland’s narcotics law, which if approved, would decriminalise cannabis.

The Federal Health Office – which spent months drafting the legislation and lobbying for it – fears that a rash move towards cocaine prescription could encourage opposition to the law.

But Thomas Zeltner, the department’s director, recently said there would no legal impediment in the way of a pilot project of cocaine prescription. This is a softening of his earlier position, when he insisted cocaine would never be prescribed in Switzerland.

Ultimately the decision on a pilot project rests with cantonal authorities. In Zurich there is strong support for such a scheme, although officials there had been hoping for some financial support from the government.

“If Zurich wants to try, we won’t be against it,” Jann told swissinfo. “We will follow it with interest, but there’s no reason for us to finance it.”

“There are many different options for treating cocaine addiction without working with cocaine itself. We haven’t tried everything yet.”

At the conference, Zurich doctors and social workers are expected to unveil a plan for a trial project of prescription involving around 20 patients.

Half of them would be people already on heroin prescription who remain addicted to cocaine, and the other half would be very heavy cocaine users whose health is seriously at risk.

“Obviously it would run in a similar way to heroin prescription,” explained Athos Staub, president of ARUD, a group dedicated to reducing the risks of drug taking.

“Just because cocaine is called the party drug doesn’t mean we’d be handing it out on a Saturday night. People would have to come to us and take the drug at our centre,” Staub continued.

Both Staub and Meili are insist that cocaine prescription is worth trying.

“People said ten years ago that heroin prescription wouldn’t work,” said Meili. “In fact it has helped a lot of people.”

“Over the past ten years the problems with cocaine have been getting worse, and based on what I see now, I think legal prescription of cocaine could… help people to live rather than to die.”

Switzerland has had a heroin prescription programme for 10 years.

There is evidence that patients on the scheme have improved health and more stable lifestyles.

Some doctors, especially in Zurich, would now like to try cocaine prescription, but the Swiss government is reluctant.

The price of cocaine is falling all over Europe while the rate of cocaine addiction is rising.
In 2003 drug related crimes rose by almost 6% in Switzerland.
194 people died from drug overdoses last year, 27 more than in 2002. 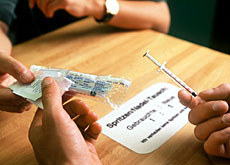 Switzerland’s policy of providing clean needles and safe injecting rooms for drug addicts is being seen as a success in reducing the spread of HIV ... 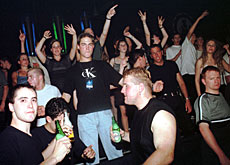 A growing number of young Swiss are turning to alcohol and drugs as a way of dealing with stress, according to a study presented on Wednesday. It ... 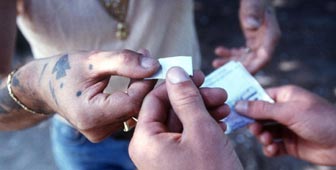 Hard drugs use on the rise

Drug use in Switzerland is changing - more people are using hard and chemically manufactured drugs with heroin taking a back seat to ecstasy and ... 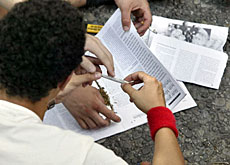 The vicious circle of drug dependency

Hans B. is the kind of person cited by doctors as someone who might benefit from a trial cocaine prescription programme. Hans – not his real name ...