A look into any Swiss school playground will tell you: there are no school uniforms. Unless of course you count jeans, hoodies and trainers. Why?

In fact, the only place you will really find school uniforms are in elite private schools, such as the Lemania-Verbierexternal link international school into which the Danish Royals Frederick and Mary have enrolled their four childrenexternal link for a 12 weeks, starting on January 6 (grey trousers, white polo shirt).

The uniform topic periodically comes up though. In spring 2019 the Valais cantonal parliament roundly rebuffed a motionexternal link for the canton’s state (public) pupils to wear school uniforms – education is the responsibility of the cantons in Switzerland – arguing that it would be “a step backwards” and that pupils were already subject to rules on acceptable clothing.

“School uniforms are mostly found in Anglo-Saxon countries, former British colonies, and Asian countries. Switzerland never had school uniforms in public schools, so there is no historic precedent,” explains Beat A. Schwendimann, board member of the German-speaking Federation of Swiss teachers (LCH).external link

Uniforms have their historical rootsexternal link in military uniforms and have been used since the 19th century as an expression of egalitarian ideals, he said. In private schools, they are used as a visual distinction between elitist schools and public schools. “Both motivations for school uniforms do not fit into a modern Swiss public education system in a democratic and pluralistic society,” Schwendimann said in email comments.

The LCH’s French-speaking counterpart, SERexternal link, is also against uniforms.

School dress codes ‘You’re going to school, not out clubbing’

“The positive effects are too uncertain, the affront to personal freedom would be enormous and the cost of the uniforms is not regulated,” the LCH states in a position paperexternal link on dress codes.

As pointed out in Valais, many Swiss schools already address clothing issues internally with dress codes. Headscarves are also allowed in schools, according to a Federal Court ruling.

There was an attempt by a Basel secondary school to test out “trendy” uniforms on a group of 14-year olds back in 2006.

“It was a time when youth fashion was marked by an extreme form of ‘sexualisation’: low-cut trousers, string tangas which were worn so you could see them, crop tops, low-cut t shirts. This was causing problems with pupils from other cultures, some teachers and also wasn’t advantageous for career decisions (interviews, work experience). Pupils getting into debt was also a big topic,” remembers Christian Griss, head of services at Basel City cantonal education departmentexternal link, who was then the WBS Leonhard school principal.

The school proposed a mix and match uniform from a local designer which included cargo pants, hooded tops and beanie hats, so a far cry from what is normally considered a school uniform in other countries. It cost SFr730 ($740), but was subsidised so parents did not pay the whole amount.

Learnings from the project

But the pilot project was dropped after six months. The main reason – in addition to the lack of support for the idea from the canton’s educational authorities – was the young people: the uniform wasn’t classic enough for them, explained Griss by email.

“In the end they wanted to wear their “style” and be perceived as doing so. A classic uniform like in England might well have had higher acceptance,” he continued.

An external evaluation carried out by the University of Basel’s Psychology Institute found no significant effects on pupils’ behaviour through the project (such as class atmosphere) compared to the control classes (although the authors noted that this had been expected due to the short period of time involved).

However, the project, which gained a lot of publicity, did prompt a lot of discussion among pupils and the wider public about “school dress codes, as well as consumer and designer brands pressure”, according to a cantonal media statement at the time.

What do pupils think of the idea now? One Swiss-Irish family has experience of both systems. The children of author Clare O’Deaexternal link, who also acontributor to swissinfo.ch, spent two terms in an Irish primary school, their mother’s homeland.

Used to being able to choose what they wore in canton Fribourg, the three girls had to get used to wearing a grey kilt, white shirt and blue cardigan in Ireland. And they had a school tracksuit for sports lessons.

Their verdict was mixed. "I never normally wear a skirt, but I didn't mind for school because everyone else was wearing it too. It was really handy knowing exactly what to wear every morning,” said Ciara (13). But her twin sister was less convinced: "I think it's better without a uniform so everyone can have their own style," said Maeve.

Younger sister Ashley found the weather a problem: the uniform was sometimes not warm enough on cold days and sometimes too warm on hot days.

Their mother, Clare, an author, also felt the practical considerations: it cut down morning prep time if you knew what to wear. It was however expensive, so luckily there was second-hand clothing. “Compared to what they normally wear, the uniform was quite old-fashioned, and I think I enjoyed that more than they did,” observed Clare.

Uniform is a tradition in countries such as Britain, Ireland, India, Australia or Cyprus. In the United States school uniforms are fairly common at private schools, but not state schools. Japan also has school uniforms, as does China (often more sportswear type of uniforms, so unpopular). In Arab countries there are often uniforms. In Tunisia, for example, they are strictly enforced. In Spain, they are just for private schools, but uniforms are worn in public schools in Latin America, for example in Brazil. There are no uniforms in modern Russia - the practice was abolished in 1994 - except in a few private or prestigious public schools. 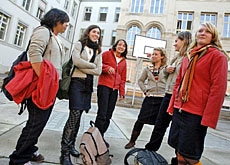 Pupils slip into something more controversial

Forty secondary school pupils in Basel started classes in uniforms on Tuesday, in the first ever project of its kind in Switzerland. The ... 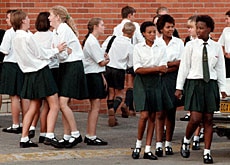 Schoolyards have become such a showcase for expensive brands and street fashion that uniforms are being suggested by some as a necessary response.

The Swiss Federal Court has rejected a canton St Gallen commune’s ban on wearing Muslim headscarves, or hijabs, in school.

Is it possible to be happy with your body as a teenager? Less than 40% of Swiss teenage girls are pleased with the way they look. It’s a pattern ...