A new type of accommodation is going to appear near Zurich: flats made to measure for people suffering from a rare allergy.

People who are affected by Multiple Chemical Sensitivity (MCS) can hope for a better life now that a unique project in Europe is proposing to create special homes for them.

“I have spent thousands of nights in a camper. At the moment I’m sleeping in the woods, where the temperatures are lower”.

Christian Schifferle has no choice. “I cannot stay in an office or a flat for too long,” says the man who is president of the building cooperative “MCS health habitations” and is himself an MCS sufferer.

People with the allergy react to chemical environments or to a range of chemical substances. They may have strong reactions to paint, synthetic materials, cosmetics, perfumes or deodorants.

MCS is a little known illness and is the subject of many debates. Several doctors refuse to recognise it as an organic pathology and consider it to be the consequence of psychological problems.

“This is an ailment which is similar to autoimmune diseases and it is very difficult to diagnose, since the usual examinations for allergies do not necessarily detect them.

It is therefore necessary to make observations and listen to what the patient says,” Klaus Tereh, a doctor and member of the cooperative committee, explains.

Tereh added that the illness could even lead to death. “Some patients react as one would do to an anaphylactic shock.”

The life of those with MCS is characterized by a lot of suffering. In fact, Schifferle says, the disorders are so strong that they can have devastating effects: “The chemical substances are everywhere and this leads to the patient’s isolation from his familial, social and professional circles”.

There are also important consequences on the psychological level. “MCS generates fear and insecurity. Many people, especially women, don’t have the courage to wear a special mask to work in an office.”

“Often, the illness is not diagnosed correctly or is minimised. It has been the story of my life for 50 years, which is why I would like to help people who go through this ordeal,” Schifferle added.

He says constructing allergy-proof housing or staying at a hotel with special standards is expensive, which most MCS sufferers cannot afford. Even if they could, the buildings are few and far between.

All this prompted community members to work together to pool their resources.

At the beginning of 2008, around 50 people with MCS decided to create a cooperative in order to build a block of 15 flats at affordable prices - roughly SFr1,350 ($1,411) a month for a two-bedroom apartment.

The project, which costs SFr5.8 million, should be finished in 2013 in the commune of Leimbach, a location the MCS community deems favourable due to the low levels of electrosmog in the area.

The new building will be made mostly with chemical-free natural stone.

A purification unit will be installed at the entrance of every building to eliminate chemical residues.

This project – a first in Europe – could benefit from the support of the city of Zurich and Swiss authorities: “It wasn’t easy. The process has lasted 20 years, during which time we have tried to explain what our life is like and how important it is to have adequate housing. It is of vital importance, not a luxury,” Schifferle explained.

He is convinced that the cooperative will succeed in finding the remaining SFr1.3 million needed to complete the project.

Looking to the future

The hope of the cooperative is that similar structures will be built in other parts of the country too.

Schifferle says that he knows of a few hundred other sufferers in Switzerland, even though it is difficult to obtain more precise numbers at a nationwide level.

Not only does the illness prevent many people from working, Schifferle says they are doubly disadvantaged because they are not eligible for allowances from Switzerland’s disability insurance scheme.

“The fact that the allergies are caused by permissible concentrations of chemicals doesn’t help”, Tereh explained.

The doctor is hopeful that continuing research will eventually shed more light on MCS, and put an end to doubts. “This is my wish for sufferers who have to live in quite dramatic conditions.”

MCS is a disorder associated with low-level environmental exposures to chemicals.

According to the website multiplechemicalsensitivity.org, MCS means an unusually severe sensitivity or allergy-like reaction to many different kinds of pollutants including solvents, VOC's (Volatile Organic Compounds), perfumes, petrol, diesel, smoke, "chemicals" in general and often encompasses problems with regard to pollen, house dust mites, and pet fur.

Unlike true allergies - where the underlying mechanisms of the problem are relatively widely accepted - MCS is generally regarded as "idiopathic" - meaning that it has no known mechanism of causation and its processes are not fully understood.

The Geneva-based World Health Organization says on its website: “MCS is characterized by a range of non-specific symptoms that lack apparent toxicological or physiological basis or independent verification”.

Why spring can be miserable for some

Spring flowers and blossom can be beautiful, but for the more than one million people in Switzerland who have a pollen allergy, they can spell ... 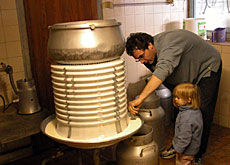 Cows' milk can protect against asthma

Children who start drinking fresh milk from the farm early on are less likely to develop allergies when they are of school age, according to Swiss ... 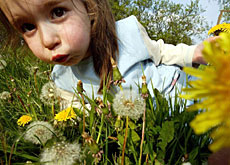 Allergies often start in babies and linger on as a person ages, leading to an "allergy career", Swiss experts said on Wednesday. They have now ...

The experimental Rolex Learning Centre has opened its doors. The radical, open, undulating student building at Lausanne's Federal Institute of ...