The inhabitants of Geneva's oldest and most famous squat, Rhino, have finally been evicted after occupying the building for almost 20 years.

It is the end of an era for the Rhino, which was set up to promote communal housing in a city where there has long been a shortage of accommodation.

A large police presence was on hand to stop an estimated 300 demonstrators from intervening.

A small group of protestors, which attempted to block the evictions, was removed from the site in downtown Geneva. There were also minor clashes, with the police using water canon and tear gas to disperse the crowd.

The proprietor of the building and the lawyer for the squatters had put their cases to a magistrate last week.

The Rhino had successfully fought off previous eviction attempts over the past two decades.

Geneva chief prosecutor Daniel Zappelli, who ordered the police to evict the Rhino, defended the move at a media conference in Geneva.

"There comes a time when state authority should be affirmed and restored," he said. Zappelli is currently dealing with at least 27 criminal procedures concerning squatting in Geneva.

Another squat close to the Rhino was evicted earlier this month.

For his part, Pierre Bayenet, the Rhino squat's lawyer, was quoted by the Swiss news agency as saying that Monday's eviction was "illegal and scandalous".

The move could be seen as signalling the end of Geneva's liberal attitude to squats, according to observers. Since the 1980s the authorities had tolerated the takeover of unoccupied buildings.

This made the city unique not only in Switzerland but also in Europe. At the height of the squat movement, in the middle of the 1990s, Geneva had 160 buildings illegally occupied and more than 2,000 squatters.

The movement to occupy empty buildings started in Geneva in the 1970s.
It was part of a trend in cities all over the western world – New York, London, Berlin, Amsterdam, and Copenhagen.
Squatters wanted to create an alternative lifestyle. 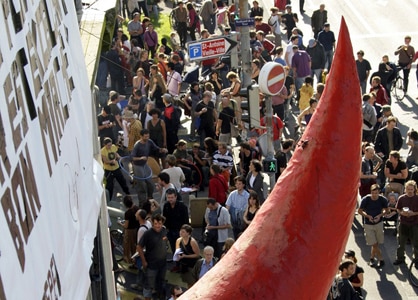 End of the road for Geneva's squats?

The inhabitants of Geneva's oldest and most famous squat, Rhino, expect to be evicted soon. It will end nearly 20 years of Rhino, which was set ... 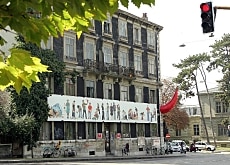 One of Geneva's oldest squats, the Rhino, is heading for a showdown with the canton's justice authorities over plans to evict its 70 residents. ...