A group of 459 elderly women has sued the Swiss government over its alleged failure to take the necessary measures to combat climate change. This form of citizens’ involvement is new for Switzerland.

They claim that older women in particular suffer from the effects of climate change, including long heat waves.

“Heat can lead to death for older women,” said the group’s lawyer Ursula Brunner in Bern on Tuesday, as the complaint was handed in. “There is evidence that hot periods are occurring more often as a result of climate change.”

The women accuse Environment Minister Doris Leuthard and the government of undermining the climate goals enshrined in the Swiss constitution and of violating human rights. It is not enough to reduce CO2 emissions by 20% by 2020 compared with 1990 levels, they said.

Brunner says the Swiss government’s climate policy violates Article 10 of the federal constitutionexternal link, which addresses the right to life and personal freedom and Article 74, Paragraph 2, which states that the government “shall ensure that such damage or nuisance is avoided. The costs of avoiding or eliminating such damage or nuisance are borne by those responsible for causing it”.

The 150-page complaint included a list of demands, such as an incentive tax on motor fuel, an obligatory building renovation programme, precise emission controls for new vehicles and concise climate regulations for agriculture.

The legal instrument has never been used in Switzerland to push for a change in the official climate policy.

If they fail to get a satisfactory response in Switzerland, the group said it would consider taking the case to the European Court of Human Rights.

Brunner says the complaint is not only based on the Swiss constitution but also on the European Human Rights Convention protecting the right to respect for private and family life.

The group says it was encouraged by a successful action in the Netherlands, where a court upheld a complaint by a non-governmental organisation and 900 citizens against the Dutch government to take stronger measures for climate protection.

In April, a judge at a United States Federal District court in Oregon ruled in favour of a group of plaintiffs, aged 8-19, in a landmark constitutional climate change case brought against the US government and fossil fuel industry. The young people alleged the US government was failing to protect them from the harmful impacts of climate change.

A group of women is planning to take the Swiss government to court over its alleged failure to take the necessary measures to combat climate change. 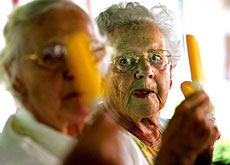