Rare Etruscan artefacts stolen during illegal excavations and hidden away for more than 15 years at Geneva’s free port, have been handed back to Italy, the Geneva prosecutor’s office announced on Thursday.

A total of 45 cases of stolen artefacts, including two rare Etruscan earthenware sarcophaguses, bas-reliefs, vases and fragments of decorated vases, frescos, heads, busts, and other antiques, were handed back to the Italian authorities.

Two years ago, Italy requested assistance from Switzerland to track down a stolen Etruscan sarcophagus that was believed to have transited through the Geneva Free Port.

“A search carried out by the prosecutor Claudio Mascotto at warehouse at the customs-free zone at Geneva free port revealed the presence of a treasure – two Etruscan sarcophaguses, rare earthenware pieces of exceptional quality, with lids representing a reclined man and woman – and many other archaeological treasures of great value,” the office said in a statement.

The Geneva authorities subsequently seized the objects, which they say are 'priceless'.

An Italian expert concluded that the treasures originated from illegal excavations carried out at burial sites in the central Umbria and Lazio regions in Italy – formerly known as Etruria.

The Etruscans, whose civilization began to emerge around 800BC, were known as the first superpower of the western Mediterranean and developed some of the first early cities in Europe. Their civilization had a profound influence on ancient Roman culture.

The pieces were stored for over 15 years in the warehouse, registered under the name of an offshore company, the prosecutor’s office said.

A former high-profile British art dealer, who was previously linked to trading looted antiquities, it said, without divulging the art dealer’s name, had brought the antiques to Geneva.

In 2014, Switzerland returned the last of 5,800 Etruscan and Roman antiques, which had been stolen through illegal excavations in Italy and seized from a Basel art dealership, concluding a 13-year collaboration.

It was followed by an ordinance in 2005 that made the declaration of the origin, ownership and value of cultural property imported into Switzerland obligatory. That followed in 2009 with the obligation for all holders in free ports to make available at all times a complete inventory of goods held.

Last November Geneva’s free port said it was tightening up checks on wealthy individuals storing fine art and other riches at its huge warehouse facilities. This followed a critical 2014 federal report, which highlighted the possible risks of trade-free zones to Switzerland’s reputation.

Geneva’s free port says it is tightening up checks on wealthy individuals storing fine art and other riches at its huge warehouse facilities. This ...

The Basel City prosecutor’s office has returned the last 68 of 4,536 stolen art and archaeological objects to Italian police, concluding 13 years ... 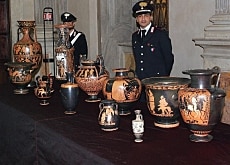 Switzerland and Italy have signed a deal making it harder for smugglers to use Switzerland as a conduit for stolen antiquities. The accord, ...

Free port problem Closing in on the archaeological underworld

Switzerland has been cleaning up its free ports after a 1995 scandal on its home turf triggered a probe into looted antiquities. Globally, the ...