Twelve months after a nationwide vote in favour of banning the construction of minarets, the town’s mayor is rather unhappy about the continuing publicity while the business community appears to ignore the controversy.

The row over the local minaret has not gone away. It had already received planning permission from the town before the vote was held, and that was confirmed by the cantonal authorities in September 2010. Opponents have now taken their case to the cantonal administrative court, which is expected to rule in 2011.

Considered by some as a byword for averageness, Langenthal is a town with a population of about 15,000, half way between the country’s business hub Zurich and the capital, Bern.

It is hardly a coincidence that the town and its consumers serve as a test ground for marketing experts seeking to launch new products, at least in the majority German-speaking part of the country.

The media attention over the planned minaret is not really welcome to the mayor Thomas Rufener. He wishes that people would simply see Langenthal living up to its reputation as an “average” town.

He points out that the result of the anti-minaret vote in November 2009 was similar in Langenthal to that nationwide, and adds that several political parties are trying to benefit from the media spotlight.

Rufener, a member of the rightwing Swiss People’s Party, dismisses the conservative and islamophobic image of Langenthal touted by much of the media.

“A lot of the international media are interested in Langenthal. But they lump the town and the anti-minaret ballot together, although the underlying issue has got nothing to do with Langenthal,” Rufener told swissinfo.ch.

Twelve months after the vote, supporters of the minaret ban have announced plans to put up a memorial near the Muslim prayer hall, a building that at night looks more like a brightly-lit sports hall than a religious centre in an industrial zone on the edge of Langenthal.

The committee wants the monument – a human-sized statue in the shape of a corkscrew – to be placed in the middle of a major traffic roundabout.

However, the request has been rejected by the local council.

As a model of the monument is unveiled in a nearby state-of-the-art hotel, campaigners say the aim is to remind people of the persecution of non-Muslims in Islamic countries. The recent attack on a church in Iraq is mentioned during the event.

They harshly criticise the authorities for approving the construction of the minaret in Langenthal despite the verdict by voters. Several speakers also tap into fears of an increasing influence of Islam in Switzerland.

Fears of a different kind are felt by the members of Langenthal’s Islamic community, which is made up mainly of ethnic Albanians who immigrated from Macedonia.

Paradoxically, European Muslims who themselves were persecuted at home and fled to Switzerland are now put in the same category as Arab terrorists, says Mutalip Karaademi, a spokesman for the local Muslim community.

“There was no religious freedom in the former Yugoslavia. Even imams had to be members of the Communist Party. And during the 1990s military conflict in the Balkans, things took a turn for the worse.”

He says it is sad to see that victims of persecution have again become targets of political propaganda in a country like Switzerland which is proud of its democratic system which guarantees religious freedom.

A solution to the conflict over Langenthal’s minaret is still a long way off, says Daniel Kettiger, the legal adviser to the local Muslim community.

He knows that opponents will take their case to the country’s highest court, but is convinced that they will not prevail.

“The European Court of Human Rights will put an end to it,” he said.

That claim is of course disputed by supporters of the minaret ban. Walter Wobmann, a member of parliament for the Swiss People’s Party, warned the European court not to rule against “a decision by the people of a sovereign state.”

He told the audience at the unveiling of the model memorial that there were grounds to take legal action against the Koran as a whole if judges were to consider a ban on minarets to be a breach of human rights.

“The court would also have to rule on stoning, forced marriage and corporal punishment for women and children,” Wobmann said.

Meanwhile, in the huge dining hall of the same hotel, business people speaking Italian and English are enjoying the meals being served to them by Asian waiters.

Neither the minaret nor the memorial appears to be a topic of conversation. Instead the names of well known local Langenthal companies are being mentioned: Lantal Textiles, Création Baumann - the interior design textiles company, and - of course - Ammann Group, the engineering company owned by the family of the new Swiss economics minister, Johann Schneider-Ammann.

A foreign employee of the hotel is unworried when asked whether the political protests did not hamper business in general and the local hotel sector in particular.

“Well, business people are normally only here during the week,“ she said.

“Most of them do not know anything about the demonstrations which take place at weekends. As for any Swiss guests who might be staying over the weekend the protests do not come as a surprise to them.”

The political debate over minarets began several years ago over plans in the towns of Langenthal, Wil and Wangen near Olten.

The controversy peaked in a nationwide ballot on November 29, 2009 when voters approved an initiative by rightwing parties to ban the construction of new minarets with a majority of 57.5%.

The result was seen as a major political upset and drew worldwide media attention.

A legal battle is continuing over the planned minaret in Langenthal.

There are presently four mosques with minarets in Zurich, Geneva, Winterthur and Wangen near Olten.

An estimated 4.5% of Swiss residents are Muslims, mainly from southeastern Europe and Turkey.

A poll commissioned by the Protestant Church newspaper, Reformiert., 12 months after the anti-minaret vote found that 43% of respondents would again approve the initiative.

This compares with 57.5% of voters which approved the initiative in 2009.

The poll also found nearly 49% of respondents saying the outcome of the vote in 2009 had had no noticeable impact on coexistence between Christians and Muslims in Switzerland.

However, nearly 49% also found there was anti-Muslim sentiment in Switzerland while about the same percentage of respondents rejected the assumption.

The survey was carried out by the Isopublic polling institute among 1,004 people in the German- and French-speaking part of Switzerland.

Switzerland is promoting dialogue with the Muslim world as it comes to terms with the electorate’s decision six months ago to ban the construction ...

Swiss Muslims put their problems on the table

The vote to ban the construction of minarets in Switzerland has been a wake-up call to both the government and Swiss Muslims, round table talks ...

The proposal for a minaret ban was treated too hastily by the Swiss authorities, who have to take part of the blame for the result of a nationwide ... 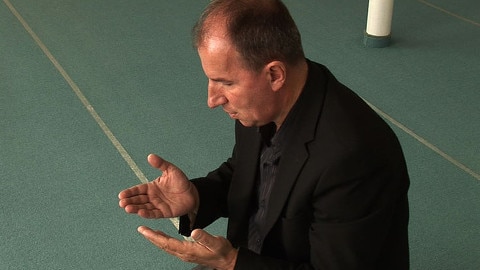 Muslim leader in Langenthal defends building of minarets. swissinfo.ch sought a response to Ulrich Schlüer's arguments from the Islamic community ...

The campaign to stop the building of any new minarets in Switzerland has been spearheaded by Ulrich Schlüer from the rightwing Swiss People's Party.