Islamic scholar Tariq Ramadan has been fired from his position at a Netherlands university over connections to an Iranian-funded television channel.

In a statement, the municipality of Rotterdam and the Erasmus University Rotterdam said that the Swiss-born theologian's hosting of a programme on Iran's Press TV was "irreconcilable" with his position as a guest professor.

"Although there is no doubt at all concerning Dr Ramadan's personal dedication, both boards found this indirect relationship with a repressive regime, or even the impression of being associated with it, not acceptable," the university wrote.

It said Ramadan should have "immediately and unambiguously" ended its relationship with the channel but noted it was happy with his work.

Ramadan, who will chair an Islamic studies department at Oxford University at the beginning of September, also lost his position as an advisor on integration with the city of Rotterdam.

In a statement released on Tuesday on his personal website, Ramadan said he had taken the job with Press TV, an English-language channel, as "the path of critical debate".

"I accepted no obligations," he wrote, adding that he intended to take "all the time necessary to make the proper decision".

That wasn't enough for the Dutch, who noted that other academics formerly associated with Press TV had severed ties in light of Iran's crackdown on democracy activists.

Ramadan said: "When they single out a 'visible Muslim intellectual' for attack, their real agenda is the politics of Muslim-baiting and fear."

Ramadan is barred from entering the United States over money he donated to a Swiss Palestinian group from 1998-2002. Washington listed the Association de Secours Palestinien as a banned group in 2003, saying that it supported terrorism and had contributed funds to the Islamic movement Hamas.

Ramadan has maintained that he was unaware of any connections between the charity and terrorism.

Muslim communities and education authorities in Switzerland appear to agree that the country's universities could train future imams. A study by ... 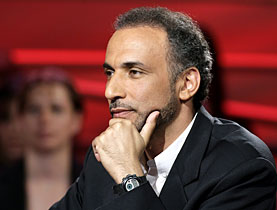 Groundbreaking talks between Muslims and Roman Catholic officials are taking place in Rome, as both sides seek to improve dialogue and defuse ...