As the grand opening of Prime Tower in Zurich nears, it seems that skyscrapers are gaining acceptance in the Swiss landscape.

At 126 metres tall, Prime Tower is the highest building in Switzerland – followed by Basel’s 105-metre Exhibition Tower in Basel, which was built from 2001-2003.

“There was a time when people vehemently rejected them – saying they weren’t good for a city’s image or its residents – but suddenly people are thinking of making a big investment in something that really stands out,” Zimmermann told swissinfo.ch.

Indeed, current Swiss project proposals indicate that tall and flashy buildings are becoming the height of steel and concrete fashion. Yet the most recent wave dates back to the 1990s, according to Werner Huber, an editor at Swiss architecture and design magazine Hochparterre.

“From the 1950s to the 1970s, building high-rises was a symbol of progress. It was also a fast way of creating a lot of housing,” Huber told swissinfo.ch. These were typically built in suburbs rather than in cities.

As the reputation of cities became tarnished, families fled to the countryside.

“Towers later became a symbol of a bad path,” said Huber. The image of cities has changed over the past 15-20 years.

“Cities are now more attractive – not only for working, shopping and entertainment, but also for living – and people are moving back,” he said.

That paradigm shift has also improved the image of towers, which he describes as a symbol of the present and the future.

He cites the example of La Chaux-de-Fonds and its 60-metre Espacité Tower, which was completed in 1994.

“They wanted to put the city on the map again after the financial crisis that had hurt the watchmaking industry. Espacité was a way to strengthen the image of the city,” Huber said

Nevertheless, he would not go so far as to say that Swiss people are keen on skyscrapers.

“Compared with other countries, I’m not sure if the majority of people in Switzerland really like them. But now they accept them and there is some fascination,” Huber said, adding, “This gives architects a chance to think in other scales.”

Trendy or not, Zimmermann points out that it is not easy to construct large new buildings, regardless how practical or attractive.

“In Switzerland everything is looked into in extreme detail and anybody can lodge an objection. You have to consider the shadows it will cast and there is a lot of discussion about whether it’s too high and from where it can be seen. The process is very cumbersome in Switzerland; I think it’s probably easier in other countries,” Zimmermann said.

He finds that when well executed, high-rise buildings can add a great deal of much-needed space for schools, services and even apartments, but cautions that some areas can end up too congested.

Swiss regulations require that tall buildings have a certain amount of open space around them. In other words, the surface area of the plot sets a limit on the height.

Zimmermann is not a fan of the highest building in Switzerland, the design of which he finds too conservative and narrow-minded.

“The Prime Tower in Zurich is a bad example both because of its location and the way it’s positioned on the ground. It’s not really a success, especially the entrance,” Zimmermann said.

Huber, on the other hand, quite likes it.

“It’s a perfect location for a tower because it’s in a newly developed area near the railway station and highway. I also like the shape; it’s quite simple – not too many details. That’s not bad because it should also look good in 20 to 50 years,” Huber said.

In Zurich, additional high-rises are already in the works; for example, Swiss Federal Railways is building a 57-metre-tall office complex for 900 employees; permission to build another tower nearly 80 metres tall was granted this summer.

In Basel, Roche is planning to construct a new tower starting in 2012. At 178 metres, it will be Switzerland’s tallest building. The blueprints for this tower replaced those of a 154-metre helix-shaped one – which were eventually scrapped.

“I was happy when I heard that the Roche Tower project had been cancelled. I’m sure it would have been a spectacular building, but for me it’s not the right place,” Huber said, noting that the new version would also be in the “wrong” place because it is not in a public area.

That building, shaped like a rough triangle, will be 175 metres tall when finished, thus exceeding Zürich's Prime Tower.

Basel’s Exhibition Tower, on the other hand, is in the right place, finds Huber.

“In a skyline a high-rise gives you a point of orientation, and the Exhibition Tower is in the right place for that. It’s really important for the city.”

At 828 metres, the Burj Khalifa in Dubai is the world's tallest building.

The Shanghai Tower, currently under construction, will soon follow it. It will be 632 metres tall when done.

The tallest building in Europe will be completed next year; this is the Shard London Bridge (310m) by Renzo Piano.

Worldwide, there are 50 towers stretching over 300 metres, only seven of which were built before 1990.

(Source: exhibition catalog for "High-Rise, Idea and Reality" at Zurich's Museum of Design)

Keeping pace with the population boom

A million more people will be living in Switzerland by 2035, all expecting to enjoy high standards of living, affordable housing and quality ... 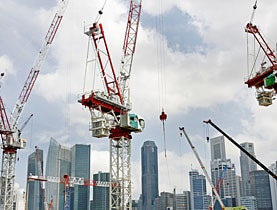 A Swiss-Singaporean team is tackling the global problem of burgeoning populations cramming into over-crowded conurbations with a ... The alpine chalet may be one of Switzerland's most enduring images but a new building could soon take over as its architectural icon. At 154 ... 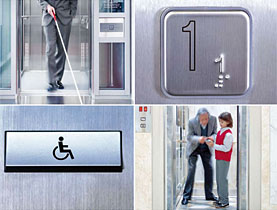 Elevating the minds of future architects

Many modern buildings are still not accessible to people with disabilities – a state of affairs that Swiss lift company Schindler is trying to change.

Reaching for the skies

An exhibition dedicated to skyscrapers comes to Zurich. Switzerland is preparing to inaugurate the Prime Tower in Zurich, the country's tallest ...