Phrases like "refugee crisis" and "migrant waves" have routinely made the headlines in recent years. But is the prevailing feeling that Europe is facing an unparalleled level of mass migration backed by hard numbers?

Here is a much quoted figure released by the United Nations that we used in our previous story: 244 million migrants worldwide in 2015 making up 3.3% of the global population. However, these impressive numbers represent migrant stocks, i.e. the cumulated number of people living in a country different to where they were born, making no distinction between an exchange student abroad for a year or somebody who has been living in a different country for 40 years.

Fortunately, researchers have managed to quantify who moved where and when. Guy J. Abel*, a Professor at Shanghai University's Asian Demographic Research Institute, has developed a method to infer global migration dynamics over time from such migrant stock data. He published the results in the journal Scienceexternal link and shares some finding below. The graphic may appear complex but so are global migration flows.

Highlights of the graphic:**

This visualization puts into perspective a common Eurocentric worldview that the whole world is trying to come to Europe. One cannot simply dismiss the challenges that Europe is currently facing with a strong influx of refugees and other migrants over the last couple of years. However, the number of people coming to Europe represents only a fraction of the global migration flows.

The image below shows an overview of the migration flows into Switzerland alone. The message is similar, immigration from different individual European nations (in green) is comparable in size to other world regions. 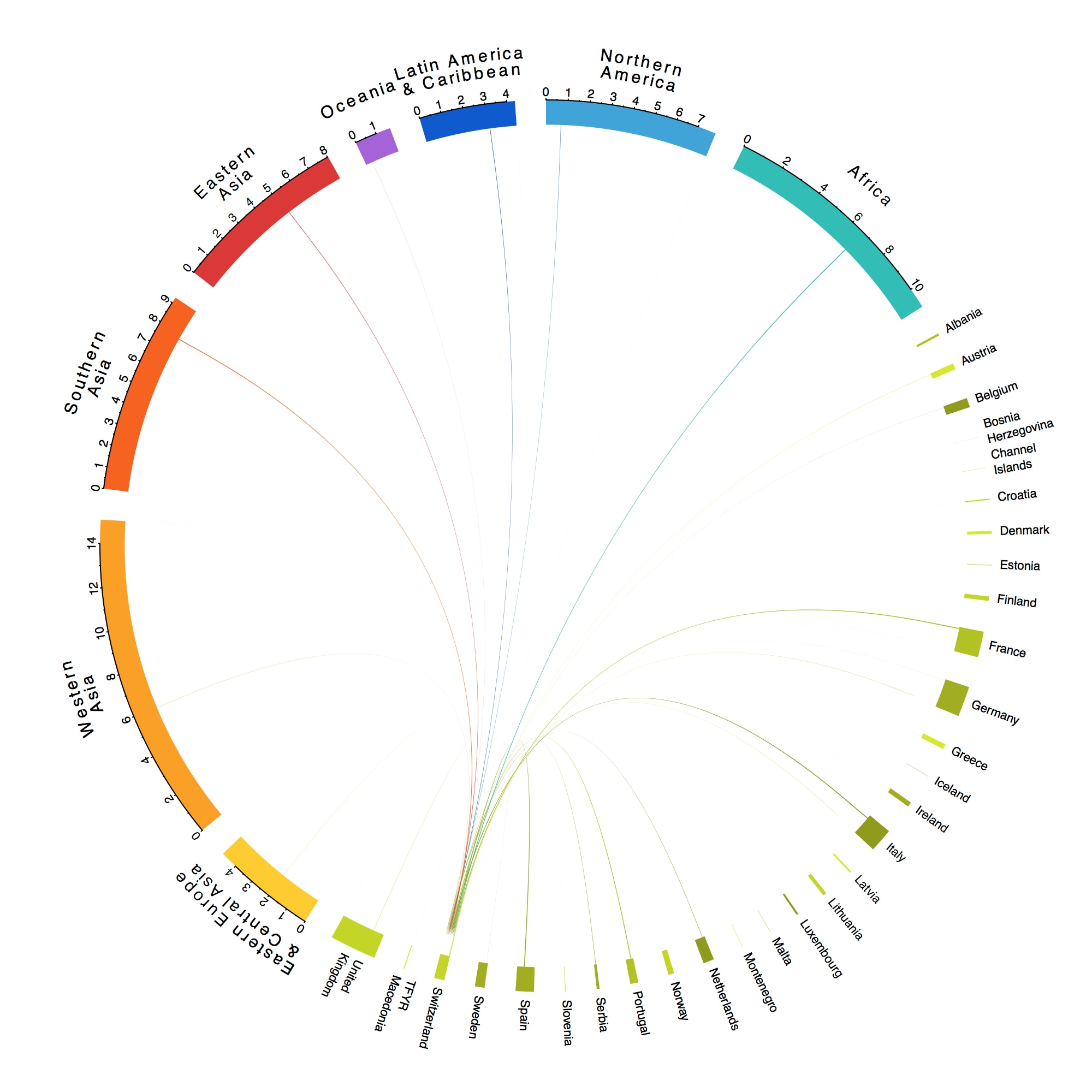 The lowest global migration since 1960

Worldwide migration can be estimated from as far back as 1960external link and data from the past puts current migration into context. The share of migrants worldwide has been astonishingly constant for more than half a century at around 0.6% of the global population. In other words, for every five-year period, six out of 1,000 people have moved to a different country. Thus the 0.5% migrant population for the last previous five years is the smallest value since 1960. The global migration rate reached an historic peak between 1990 and 1995, a period when the Iron Curtain had fallen and the Yugoslav Wars had started.

Voting by the Swiss people to limit foreigners; Brexit; tensions within the EU to cope with the influx of asylum seekers – immigration is a key concern across the continent and beyond.

In Switzerland, as in the UK, the government is under pressure to limit the influx of immigrants at the risk of jeopardizing access to the European market. Through graphics, swissinfo.ch presents a series on immigration to illustrate these pressures.

* Guy J. Abelexternal link is a Professor at the Asian Demographic Research Institute, Shanghai University & researcher at the Vienna Institute of Demography.

** Conclusions on the graphic are quotes of Guy J. Abel from an article in der Spiegelexternal link

To explore the migration flows since 1990 http://www.global-migration.infoexternal link

For the first time, Switzerland has 2 million foreigners living in its midst. But just who exactly are they? These graphics offer an explanation.

Migration series (Part 2) With 244 million immigrants in the world, which country has the most?

With nearly 30% of the population born outside of its borders, Switzerland is the European country with the highest proportion of foreigners.

Year in review 2015: when the wave of migrants reached Europe

Which countries have been most affected by the influx of migrants and refugees? What impact would quotas have? The answers in a series of ...