Obwalden has become the first Swiss canton to adopt a flat income tax rate, with more than 90 per cent of the electorate voting in favour of the move.

The decision, announced by the authorities after a vote on Sunday, comes after a court ruled the canton's previous degressive tax model unfair.

From next January Obwalden will impose a rate of 1.8 per cent on all categories. The new model also exempts the first SFr10,000 ($8,700) of income from taxation, a measure designed to benefit those on lower incomes the most.

Voters also said yes to a proposal to slash corporate tax rates from 6.6 per cent to six per cent next year, the lowest in Switzerland along with canton Appenzell Outer Rhodes.

There was a 33.2 per cent voter turnout.

It has been a long and rocky road towards tax changes in the canton. In January 2006, Obwalden cut its corporate levy and introduced an income tax scheme that set lower rates for the rich than people on lower incomes.

A communist politician took the canton to the Federal Court and won a ruling in June that the model was unconstitutional.

Obwalden's authorities then proposed the flat rate which they believed would lure wealthy foreigners back to the canton. This was approved by 90.7 of voters.

In Switzerland there is high competition among the cantons to set the lowest tax rates to attract wealthy individuals and companies.

This has attracted criticism both within Switzerland and outside its borders.

European neighbours have frequently expressed outrage that their rich citizens are opting to empty their pockets into Swiss coffers rather than their own. But Switzerland has defended its position as providing healthy competition.

Experts say the lower corporate tax rates could add further fuel to a separate row between Switzerland and the European Union over alleged unfair business competition.

Switzerland has a three-tiered income tax system at federal, cantonal and local community levels. Obwalden will have a cantonal rate of 1.8 per cent, but the total bill will vary depending on where people are located, as communities levy different charges.

Overall, the new system is expected to cost the canton SFr12 million in lost revenues, but its authorities say it can still foot the bill for services.

Deputy finance director Robert Vonwyl told swissinfo ahead of the vote that the new model would be more egalitarian but would not hurt the rich too much.

"Compared with 2005, high income earners already pay much less and they would only have to pay a little more from next year. From 2008 those on low incomes will benefit the most from the proposed tax changes," he said.

Knut Hackbarth, managing director of Obwalden Business Promotion, said the court decision to outlaw the degressive system had inadvertently benefitted the canton by drawing attention to its tax haven status.

He added that the tax changes were encouraging people to return to the canton, which had been losing inhabitants hand over fist before new companies arrived to invigorate the economy.

"Everyone appears to be happy with the new solution. Last year we added 500 new inhabitants to our 35,000 population, which is the second fastest growth of any canton," he told swissinfo earlier.

Even former critics of the Obwalden system, such as Gebhard Kirchgässner, professor at St Gallen University, said before the vote they would be satisfied with the changes.

"It's definitely a much fairer system and one that I do not object to. I only hope the authorities there have enough money to pay for services," he told swissinfo.

Two years ago 86% of voters approved the original tax changes.

In December 2005, Obwalden decided to cut corporate tax rates to 6.6% and introduce a degressive income tax rate that favoured the rich.

In the first six months of this year, the canton saw a 230% increase in companies registering to set up shop.

Other cantons have followed suit with tax cuts, but critics, including the centre-left Social Democratic Party, fear the competition could eventually lead to ruin.

Communist politician Josef Zisyadis took the canton to the Federal Court, arguing that Obwalden's degressive income tax broke a code in the Swiss constitution stating that taxes should be levied according to people's ability to pay.

The court upheld his objection in June. Since then, Obwalden has operated an emergency tax system. This will be replaced by the flat tax as approved on Sunday. 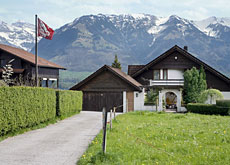 The Swiss Federal Court has ruled that canton Obwalden's degressive tax system, aimed at attracting wealthy residents, is unconstitutional. The ... 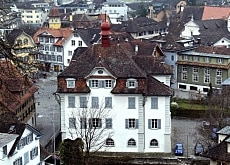 The people of canton Obwalden will wake up in a new tax haven on January 1 after voting for radical tax reforms that promise riches but also carry ...