Although not a member of the European Union Switzerland is contributing to efforts aimed at reducing social and economic disparities in the 27-member bloc.

Four years after voters endorsed a government plan for SFr1 billion ($950 million) towards new EU member states there is speculation that the Swiss might soon be asked to grant further financial support for projects.

The money goes towards projects mostly in former eastern bloc countries which joined the EU in 2004 and 2007.

So far just over 50 ventures have been approved by the Swiss authorities, which implement them autonomously. Another 60 projects under still being examined.

They cover security issues, including border controls, environment and infrastructure – renewable energy and railway services – as well as education and health and the promotion of the private sector.

Poland, Hungary and the Czech Republic are the main beneficiaries of Switzerland’s contribution.

Switzerland shoulders 85 per cent of the costs of an approved project while the remainder is paid by the partner country. So far about SFr580 million has been pledged.

The government describes the contribution as an expression of solidarity and a basis for future political and economic relations with new EU member states.

“With its commitment, Switzerland acknowledges the enlargement of the EU as an important step to overcoming the division of Europe and to ensuring security, stability and prosperity throughout the continent,” the Swiss EU integration office says.

The integration office acknowledges that the standard of living in the new member states in central and eastern Europe is still relatively low despite high economic growth rates.

In addition, many of those 12 countries have been hit hard by the global economic crisis.

As swissinfo reportages to Estonia and Poland show (see related stories), they are still marked by the impact of Soviet occupation more than 20 years after the end of the Cold War era and the fall of the Berlin Wall.

As the Swiss authorities take stock of the projects there is mounting speculation that Brussels might request a further SFr1.6 billion from Bern next year.

Neither side has confirmed the claims or even that there have been discussions about it.

Yet the Polish ambassador to Switzerland was recently quoted as saying there are good reasons to continue payments to boost economic development in the new EU countries.

Jaroslaw Starzyk told the NZZ am Sonntag newspaper that Switzerland would also benefit from stability and prosperity in eastern and central Europe.

Observers say the issue of a new instalment of Swiss funds could be on the agenda when Hungary takes over the rotating EU presidency in 2011.

As such a payment is likely to be challenged to a nationwide vote in Switzerland, it is assumed that the government will try to sugar the pill by linking it to another package of bilateral treaties with the EU.

Negotiations are already underway with the key trading partner on agriculture, food and product safety public health, as well as electricity.

For its part, the Swiss business community says in the long term it is interested in negotiating accords for the country’s banking and insurance sector as well as for the chemical industry.

Switzerland has been granting financial aid to countries in eastern Europe to help them transform into market economies.

Parliament gave the green light in March 2006, but the rightwing Swiss People’s Party forced a referendum.

Voters endorsed the SFr1 billion package in a nationwide ballot in November 2006.

Switzerland paid about SFr3.45 billion towards the transition of eastern and central European states between 1990 and 2006. A further SFr730,000 has been earmarked for non-EU member states for the 2007-2011 period.

The EU cohesion fund is aimed at member states whose Gross National Income (GNI) per inhabitant is less than 90% of the union’s average.

Switzerland’s contribution is implemented autonomously and is not part of the EU’s cohesion policy.

The cohesion fund finances activities under the following categories: trans-European transport networks and environment, including energy efficiency and renewable energy.

Estonia should be solving some crimes faster in future, armed with Swiss technologies that allow for bodies to be examined digitally and without ...

Swiss funds to put Polish trains back on track

The ageing public transport system in Poland’s capital, Warsaw, is struggling to cope with increasing commuter traffic. The old rolling stock of ... 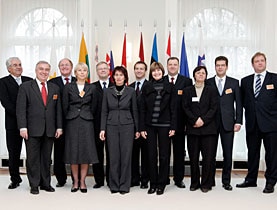