When Europe's two best teams run out onto the turf on Wednesday for the Champions League final, the man in charge will be Swiss referee, Massimo Busacca.

Although he has previously refereed World Cup and European Championship matches, this final between Manchester United and FC Barcelona is the highpoint of 40-year-old Busacca's career so far.

His calm temper and his eagle eye have helped Busacca to the number two position in the current list of Europe's best referees. The award of the top match is recognition of his masterly performances in an extremely delicate role.

Busacca is of course proud of the honour he has been paid. "I have a reputation, I enjoy respect", he said ahead of the match.

There will be no lack of stars out there with him on the turf of Rome's Olimpico stadium: Messi, Iniesta, Xavi, Henry and Eto'o for Barcelona; Cristiano Ronaldo, Rooney, Giggs and Berbatov for Manchester United. But the cream of the world's footballers will all be under Busacca's orders.

The stars and the ref: all in the game together, but they belong to different worlds. On the one hand, 22 full-time professionals, and on the other, a single semi-professional. While the stars devote their entire working life to the beautiful game, Busacca spends the rest of his week managing the staff restaurant of the Ticino cantonal government in Bellinzona.

The Messis and Ronaldos of this world can earn over a million a month from their salaries and advertising contracts alone – not to speak of the bonuses they get from winning major trophies. Busacca, on the other hand, will leave Rome richer by just SFr5,000 ($4,600).

But that's not the only difference between players and ref. The players aim for the spotlight with skilful dribbling and spectacular shots, while the referee has to be as inconspicuous as possible. For him, the ideal is not to be noticed by either the players or the crowd.

Busacca is not out for glory; for him, refereeing is a vocation. He oversees games in the Swiss Super League and in international competitions, it is true. But he was also happy to help out in the Mountain Village European championship in 2008, played by teams from mountain villages from eight European countries. And a year ago he refereed a match played by inmates of the La Stampa prison in Lugano.

If you want to be at the top, you must blow your whistle to good effect in games like this too, he says.

He may only have semi-professional status, but he has to prepare for the major match like a professional. Busacca has been studying the tactics and formations of both teams. And it is a point of honour that he should be in top physical condition.

It is the first time Busacca has been in charge of a match at this level, but it is not the first time he has overseen a game between the same adversaries. Last year he was the referee when Barça and United faced each other in the Champions League semifinal.

He remembers the occasion well: his performance was highly praised. And he is going into Wednesday's match in the same mood, with no room for any psychological pressure: "I have no time to be afraid," he says.

And such is his skill, that even when faced with the best players in the world, he has no need to be afraid either. But in any case, he will not be all alone. He has three experienced Swiss assistant referees to help him: Matthias Arnet, Francesco Buragina and Claudio Circhetta.

Massimo Busacca, 40, was born in Bellinzona, the capital of the canton of Ticino.

He has been a referee in the top Swiss league (now known as the Super League) since 1996.

Previously as a player he had made it "only" to the second league.

He has been an international referee since 1998.

In the Uefa rankings, he is Europe's second referee. 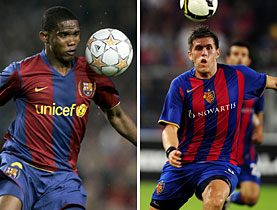 The Swiss roots behind FC Barcelona

Although Barcelona have just beat Basel 5-0 in the Champions League, both teams can look back on a common thread in their histories - Swiss player ... 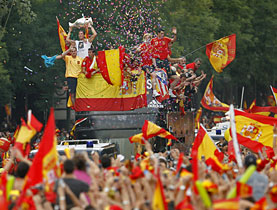 Euro 2008 reflects on successes and lessons

Organisers have hailed the Euro 2008 football championship a success after generating €1.3 billion (SFr2.12 billion) in revenues and avoiding ...

Football - the art of putting a round ball into a rectangular hole. The Fifa laws on football say: "Goals must be placed on the centre of each ...