The golden eagle once had a bad – and undeserved – reputation as a child and sheep killer. Poisoning, along with systematic nest plundering brought, the golden eagle to the brink of extinction in Switzerland. (SRF/swissinfo.ch)

In 1953, the government introduced measures to protect the species. To call attention to the remarkable bird with the difficult history, Swiss environment protection group Pro Naturaexternal link chose the golden eagle as its animal of the year in 2001. At the time, there were 300 pairs. Today there are about 350.

“The golden eagle is the only large predator in Switzerland to have survived the days of ruthless persecution during which the bearded vulture, the lynx, the wolf and the brown bear were exterminated,” says the species profile by the Swiss Ornithological Instituteexternal link.

The golden eagle population has recovered, but there is room for improvement in terms of the bird’s love life.

“Due to the large number of unpaired single golden eagles, territorial pairs are repeatedly involved in disputes. They are therefore regularly absent from the eyrie, which reduces breeding success,” notes the Swiss Ornithological Institute.

An eagle typically needs an area of 100 square kilometres to live and hunt. It feeds mainly on marmots, fawns, fox cubs, hares and even cats if there is insufficient wildlife.

Eagles also eat entrails discarded by hunters, but these often contain poisonous lead fragments from the bullets. Based on the results of an ongoing study, the Swiss Ornithological Institute advocates the use of lead-free ammunition.

Lifespan: Up to 28 years in Switzerland, 32 in Europe

Where to find: Alpine habitats, nesting in crevices and trees

Alpine ibex In the thrall of the mountain king

Each year, millions of migrating birds fly over Switzerland – but for some, the journey ends in the blades of a wind turbine. A Swiss company has ...

In a remote high meadow we hiked up to someone who had just found a gigantic eagle feather. "This is lucky!" he exclaimed. And so it was, for me ...

Efforts are being made to bring bearded vultures back to central Switzerland, where the birds have not been seen since the 19th century.

Has the eagle landed? Sherkan the bald eagle is the mascot of Geneva's Servette ice hockey club. He flew through the stadium in the Swiss ... 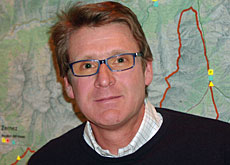 Heinrich Haller, head of the Swiss National Park, tells swissinfo how ecology and economy can co-exist and why he would welcome the return of bears.

An alpine kingdom of rock and ice