The American Alexandra Dufresne lives in Zurich with her family. She describes what it is like to experience loneliness as a foreigner, especially during the holiday season, and offers her advice on how to combat it. 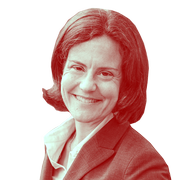 The loneliness foreigners often experience in Switzerland is like a bad neighbor: surprisingly fun to complain about and always getting in the way. Many foreigners describe Switzerland as extraordinary in terms of safety, beauty, infrastructure, healthcare, education and work-life balance. But they also report having trouble making friends here.

The holidays are an especially hard time to be lonely. Switzerland during the Christmas season is a magical place, unless you are lonely. If you are lonely, the coziness can feel like someone else’s Facebook posts - another reminder that while others have tight social circles, you are an outsider.

It can be hard to make friends as an adult, even in your own country. Work, children, life get in the way. People move; friendships fade. You can wake up at 43 and realize that if you have an extra ticket to a game, you’re not actually sure who you’d give it to.

I know loneliness well. I worked for a large law firm right after law school. I remember feeling so out of place that my stomach hurt. In my late twenties, I moved to a new city for a new job. I asked one of my co-workers if she wanted to go get dinner one night. She said she couldn’t because she had things to do, like take a shower. Ouch.

And so, when we decided to move to Switzerland, I read the blogs and guidebooks for Americans and prepared to feel seriously lonely. And yet the bouts of loneliness that I have felt since moving here 1.5 years ago are rare and fleeting. If anything, I feel significantly less lonely than I have at other times in my life. Why?

I think the answer - ironically - lies in being an outsider. Going from an insider to an outsider forced me to become more open, friendlier, less judgmental and less scared of taking risks. As an outsider, I found myself doing things in Switzerland that I did not do as an insider in the US, namely:

I used to find asking for help embarrassing. No one likes to impose. And yet, when I moved to a new country with three children, I didn’t have a choice: I knew nothing. I began to ask people for help and surprisingly, people seemed happy to help me.

Quickly I learned that I could either be embarrassed by the help or simply accept it with gratitude. And it turns out, people prefer the gratitude route to the embarrassment route. I started to accept help with grace. And the easier going and grateful I was about receiving help, the more help I received.

When I lived in America, I was pretty shy about making the first move in terms of friendship. I was, understandably, somewhat reluctant after the shower incident. And because our family settled down in the same place for a long time, I did not need to make much of an effort.

When we moved to Switzerland, we knew almost no one. If I wanted to be in a book club, I needed to start one. If I wanted our family to have friends to eat dinner with, I needed to invite them. If I wanted to find Swiss, German, and American people to complain incessantly about Trump with, I’d have to find those people too. So, I swallowed my pride and reached out. Sometimes this involved inviting other parents that I had only chatted with a handful of times. My kids started to make fun of me: "Mom, do you invite every woman you meet in our neighborhood to your English-German book club?" Actually, yes.

3. Do not expect too much

When you are in high school or college, it is easy to find the perfect friend - the special person who completely understands you and whom you completely love. But it is unfair and unrealistic to expect everyone to fill this need. Once you realize that it is ok to have many different types of friends - a friend you exercise with, a friend you talk about parenting with, a friend at work, a neighbour friend - and that no one person must be everything, suddenly you build relationships you never thought possible.

In this same vein, I became noticeably less lonely when I realized that relationships short of friendship still count. The 20-something cashier at Migros probably doesn’t need me as a friend. But when I bumped into him in another part of the city, we were really happy to see each other. He was actually positively chatty. The same thing goes for my 70-year-old Swiss neighbor and the sleep-deprived young mothers whom I help as they struggle with their buggies onto the tram. We might not ever see each other again. But I feel happier when we laugh at our kids and talk about the weather; they look happier too.

4.  Put on your German (or French, Italian or Romansch)

Speaking German feels like walking around in a swimsuit while everyone else is in business attire. (Apparently, when I speak, it feels this way to my children as well). I will never speak German as well as my colleagues and friends here speak English. They had a 20-40-year head start; I am not young anymore. Yet I insist on speaking German for symbolic reasons: to signal that I like it here, that I am trying, and that I am willing to make a total fool of myself to show how much I want to belong. And it works. It turns out that if you are willing to look silly in front of people, they will go out of their way to help you. More than once, fellow cablecar passengers have helped me study German preposition lists. Any embarrassment I felt was reimbursed in kindness.

When I first moved here, I was reluctant to volunteer, as I feared I’d be more of a burden than a benefit. Then I found something I could do that required only a tiny bit of German. My commitment is modest: about two hours of childcare per month for children whose parents came to Switzerland as refugees and who go to our neighbourhood church to learn German. It is such a small thing. But there is a special joy in chatting in German with other German learners and in letting another mother have a break from changing diapers, if only for a bit.

6.  See the loneliness around you

The first time I saw a poster for a cancer hospital here in Switzerland, I thought: “Well, that is silly: people don’t get cancer in Switzerland.” Immediately I realized the absurdity of my thought. But it exemplifies a stereotype that a lot of foreigners have. Because Switzerland can appear to new arrivals like a perfect country, we assume that Swiss people themselves must have perfect lives: no alcoholism, no drug abuse, no violence, no divorce, no mental illness, no loneliness. When I first came here, I half assumed that people speaking German and Swiss German on the train were discussing philosophy - they sounded so erudite. Now that I can understand a little better, I realize that folks are just discussing the weather, like people everywhere.

This content was published on Nov 28, 2022 Nov 28, 2022 A correspondent of Swiss public television RTS was briefly detained by Shanghai police after a live broadcast.

Indeed, it is possible that the veneer of perfection can make social isolation worse. There are public service placards in the trams in Zurich encouraging people to talk about their mental health challenges. Churches sponsor signs in the tram that say that you can stop by and just talk with someone. The suicide rate in Switzerland is still heartbreakingly high. Whenever I talk with Swiss people about the conventional wisdom among many foreigners that “Swiss people already have all the friends they need,” they insist that it is not true, that they are just a little shy, a little reserved.

And so, this holiday season, if you feel lonely, I am sorry. I know what it feels like. We have all been there; we will all be there again. But try seeing if you can use your outsiderness to your advantage. It just might work. You might succeed in making someone feel like they belong.

The views expressed in this article are solely those of the author, and do not necessarily reflect those of swissinfo.ch.