Switzerland's main north-south road axis through the Alps, the A2 motorway leading to the Gotthard road tunnel, has reopened.

The all-clear comes just ahead of the busy summer holiday period. The motorway had been closed since a rockslide at the end of May in which two people were killed.

The motorway and main cantonal road leading to the Gotthard road tunnel were reopened to cars and trucks at 5am on Friday.

Both roads were closed at the end of May following a rockslide near the village of Gurtnellen, which crushed a German-registered car and killed two people.

The main north-south motorway was temporarily reopened but had to be closed again after more rocks plunged down the mountainside between the villages of Amsteg and Göschenen.

Some 1.5 tons of explosives were eventually used to successfully blast away 5,500m3 of dangerous overhanging rocks above the A2 motorway. It took workers several days to clear the debris.

New safety nets have been installed and experts have declared the rocky cliff face safe.

Swiss President Moritz Leuenberger, who is also transport minister, travelled to Gurtnellen on Friday to visit the site and thank those involved in the reopening of the Gotthard tunnel route.

Leuenberger expressed his great admiration for the swift, professional work that had been carried out.

The reopening of the main north-south axis is extremely timely.

The Swiss school holiday period commences in several Swiss cantons this weekend and the roads leading south are expected to be particularly busy.

The A2 motorway and the entrance to the Gotthard tunnel are well-known bottlenecks, with heavy traffic in summer.

The Swiss traffic information service Viasuisse expects major traffic jams throughout July, especially at the start of the weekend.

As a result of the one-month closure, road traffic had to be diverted mainly over the San Bernardino pass in the southeast of the country, leading to long traffic jams in the region.

Local authorities and businesses complained that the local economy suffered a noticeable slowdown during the closure.

The transalpine rail link through central Switzerland had remained open while the Gotthard route was shut. The Federal Railways had laid on extra trains to cope with the increased demand.

On weekdays about 10,000 vehicles pass through the Gotthard road tunnel.
Between 12,000 and 13,000 vehicles a day use the tunnel during normal weekends.
During the Easter holiday between 20,000 and 25,000 vehicles were recorded every day.

The 17-kilometre Gotthard road tunnel is the main north-south axis through the Alps and is often a bottleneck.

Rockslides on the A2 motorway occur mainly near the village of Gurtnellen in canton Uri. The motorway leads directly to the Gotthard road tunnel. The detour over the Gotthard pass comes only after the dangerous rockslide area.

Closure of the A2 has led to traffic disruption on the north-south axis. Alternatives to the Gotthard include the A13 over the San Bernardino, the Mont Blanc tunnel, as well as the Lukmanier, Julier, Maloja, Simplon and Great St Bernard passes. 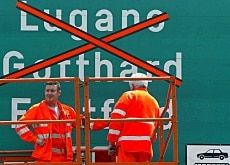 Switzerland wants to make rapid contact with its neighbours as a result of the closure of the main north-south axis – the Gotthard route – due to ... 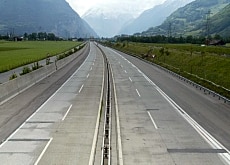 Switzerland's main north-south road through the Alps is to remain closed for at least another three weeks for fear of further rockslides. ...