Giant footprints belonging to a carnivorous dinosaur that resembled a Tyrannosaurus Rex have been uncovered in canton Jura.

The 77-centimetre-long footprints were discovered at a site on the Courtedoux plateau near the Trans-Jura motorway by a team of palaeontologists from Barcelona and Denver universities, along with the Natural History Museum of Basel.

The tracks are among the biggest in the world and belong to a three-toed theropod dinosaur of the Late Jurassic period, dating back 152 million years. The researchers believe they belong specifically to the newly-named Jurabrontes curtedulensis: a two-footed dinosaur which stood around 10-12 metres tall.

“The sheer size of the largest tracks, amongst the largest worldwide and of similar size to Tyrannosauripus from the Late Cretaceous, suggests a ‘megalosaurid’ or large allosaurid theropod,” the researchers wrote in the latest edition of the Historical Biology journalexternal link.

The region, near the village of Courtedoux in the northwestern Jura mountains, has already yielded numerous fossils, including remains of marine, littoral and terrestrial organisms. Among the finds are more than 14,000 dinosaur footprints, many of which belong to herbivore sauropods.

At the time, the environment of the Jura region is thought to have resembled that of the Bahamas in the Caribbean, with beaches, islands, a dry climate, not too much humidity, and elevated temperatures.

Fifteen years ago, the discovery of dinosaur footprints brought construction of a new motorway in the Bernese Jura to a grinding halt.

In the steps of dinosaurs

The paleontological find in canton Jura is considered the most important of its kind in the world. However, many of the footprints made by giant ...

The largest dinosaur skeleton ever found in Switzerland has been uncovered in a clay pit in northern Switzerland. The eight-metre skeleton of a ... 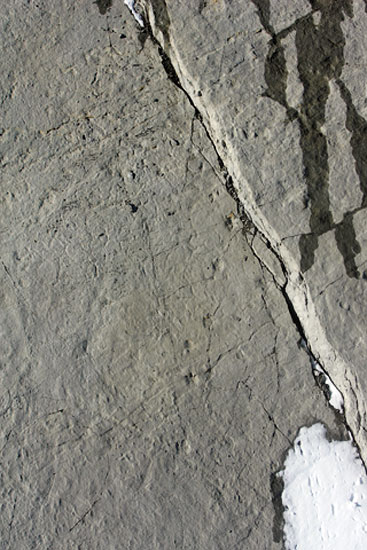 Hunting early predators in the Alps

Giant dinosaur footprints have been found in a rock face in Switzerland's eastern Alps – bigger than any other known tracks from such an early period. 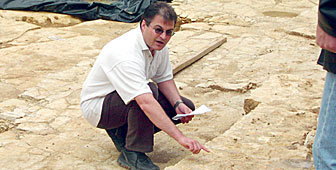 Planned motorway was once a dinosaur thoroughfare

Some 150 million years after dinosaurs crossed a Jurassic beach, hundreds of their footprints have been found in the path of a planned motorway. ...