More people kill themselves each year than die from wars and murders combined, but most suicides could be prevented, according to two international suicide experts.

The news comes as the Geneva-based World Health Organization (WHO) marks World Suicide Prevention Day and amid a debate in Switzerland on the high number of gun suicides.

Some 20 million to 60 million people try to kill themselves each year, but only about a million of them succeed, said Dr Jose Manoel Bertolote, a mental health official at the WHO.

The ones who do end their lives "are tragic situations where help could have been provided", said Brian Mishara, president of the International Association for Suicide Prevention (IASP) in Gondrin, France.

Suicide rates could be reduced if countries would limit access to pesticides, guns and medication and do a better job of treating people with depression, alcoholism and schizophrenia, Mishara said.

About a third of all suicides around the world are caused by pesticides, said Bertolote.

Dentists, veterinarians and doctors are particularly at risk for suicide – not because of their high-stress professions but because they have access to lethal chemicals and know how to handle them, Bertolote said.

Those who lose a job abruptly are more likely to kill themselves than people living in poor social conditions for long periods, he said.

Also, people living in countries where suicide is illegal such as Singapore, Lebanon and India are less likely to seek help if they have suicidal thoughts, for fear the government may punish them, Mishara said.

"Those laws don't appear to have a dissuasive effect, but rather make it more difficult for people to come forth and get help," he said.

Each year the IASP, in collaboration with the WHO, uses World Suicide Prevention Day to call attention to suicide as a leading cause of premature and preventable death.

This year's theme is "With understanding, new hope" and the focus is on translating current scientific knowledge and research about suicidal behaviour into practical programmes and activities that can reduce suicidal behaviour and save lives.

Those working to reduce the number of suicides have particular challenges in Switzerland.

Researchers at Zurich University published a study at the end of August showing that Switzerland and the United States have the highest rates in the world of suicide involving guns.

According to the study, published in the American Journal of Public Health, every day one person in Switzerland commits suicide with a firearm, usually a military weapon.

The researchers claimed that tighter gun laws would lead to fewer suicides involving firearms in Switzerland.

Following the study, Swiss Defence Minister Samuel Schmid rejected calls for weapons to be kept in military storage to reduce Switzerland's high rate of suicide by firearms, saying family tragedies and suicides were not valid reasons to stop soldiers from keeping their army weapons at home.

The high number of gun-related suicides in Switzerland hit the headlines in April when the husband of Corinne Rey Bellet, a former women's ski champion, killed her and her brother with his army pistol and then shot himself.

There are about two million firearms in circulation in Switzerland.

The number of suicides is close to 1,500 a year. Suicide accounts for more deaths than car accidents, drugs and Aids together.

Among those demanding tighter gun laws are Amnesty International, Ipsilon (the Initiative for the Prevention of Suicide in Switzerland) and the Swiss Society of Psychiatry and Psychotherapy.

In 2000, about one million people killed themselves around the world: a global mortality rate of 16 per 100,000, or one death every 40 seconds.
In the last 45 years suicide rates have increased by 60% worldwide. Suicide is now among the three leading causes of death among those aged 15-44 years (both sexes); these figures do not include suicide attempts which are up to 20 times more frequent than completed suicide.
Although traditionally suicide rates have been highest among the male elderly, rates among young people have been increasing to such an extent that they are now the group at highest risk in a third of countries. (source: WHO) 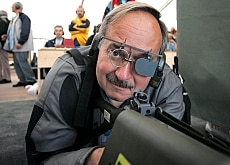 Swiss Defence Minister Samuel Schmid says family tragedies and suicides are not valid reasons to stop soldiers from keeping their army weapons at ...